This article is about the district. For its eponymous headquarters, see Namakkal.

Namakkal District is an administrative district in the state of Tamil Nadu, India. The district was bifurcated from Salem District with Namakkal town as Headquarters on 25-07-1996 and started to function independently from 01-01-1997. The district has seven taluks (subdivisions): Tiruchengode, Namakkal, Rasipuram, Velur, Sendamangalam, Komarapalayam, and Kolli Hills. It has two Revenue Divisions: Namakkal and Tiruchengode. As of 2011, Namakkal district had a population of 1,726,601 with a sex-ratio of 986 females for every 1,000 males.

After the struggle between the Cheras, Cholas, and Pandyas, the Hoysalas rose to power and had the control until the 14th century, followed by Vijayanagara Empire until 1565 AD. Then, the Allala Ilaya Nayakas vettuva king came to power in 1623 AD. Two of the Poligans of Tirumalai Nayak namely, Ramachandra Nayaka ruled the Salem area. The Namakkal fort is reported to have been built by Ramchandra Nayaka. After about 1635 AD.

Namakkal District comes under the North Western Agro climatic zone of Tamil Nadu. It is situated in the dividing portion of two watersheds between Cauvery and the Vellar System with the Taluks of Attur, Rasipuram and Namakkal on the East and Salem, Omalur and Mettur on the West. Tiruchengode taluk alone is placed under Western Agro-climatic zone.[3]

Besides the above two zones, Kolli and a few isolated hills and ridges are scattered over Namakkal, Rasipuram, and Tiruchengode and along with the valleys and rolling hills, make up the characteristic topography of the district.

The main occupation in the district is agriculture. The cultivation generally depends on monsoon rains, wells, and tanks. Nearly 90 percent of the cultivated area is under food crops. The principal cereal crops of this district are paddy, cholam, cumbu and ragi. Panivaragu, Kuthiraivali, Samai Varagu and Thinai are some of the millets cultivated. Among pulses, the major crops are redgram, blackgram, greengram and horsegram. Among oil, seeds, groundnut, castor, and gingelly (sesame) occupy important places. Of the commercial crops, sugarcane, cotton and tapioca are some of the important crops. Tapioca is used for the manufacture of sago.[6]

Namakkal district is noted for Truck and Lorry external body building which dates back to 1956. Throughout India, Tiruchengode is known for its Body Building industry for Trucks, Trailers, Tankers, and Rig Units. Finished trucks and Rig Units are even exported to foreign countries from Namakkal. Nearly 25000 people are employed, both directly and indirectly, in truck body building activity and about 300 units in Namakkal and 100 Units in Tiruchengode are engaged in this activity.[3]

Poultry development has been rather phenomenal in the district of Namakkal.[6] The district is also well known for its poultry and dairy industries, accounting for a bulk of supply of poultry products to neighbouring industries. In fact, Namakkal produces about 65% of the egg output of Tamil Nadu.[7]

Namakkal Rock Fort and temples around

The Rock Fort is on the summit of the rock, and the remnants in brick and stone still bear the brunt of the skirmishes to lay seize to the fort by the Cholas in the 9th Century.[3] There are two rock–cut cave temples located on both sides of the hill dedicated to Narasimhaswamy and Ranganathasamy.

There is also a temple, Namakkal Anjaneyar Temple housing an 18 feet tall Hanuman Statue. It is believed that the Hanuman statue keeps growing and to stop the growth a priest put a magic needle at the top of the statue's head. Hanuman statue carved out of a single stone at this Temple.[8]

Tiruchengode is 35 km from Namakkal. It is one of the seven Sivasthalams in Kongunadu. The Arthanareeswarar Temple is located on a hill. The presiding deity is depicted as half-male and half-female, vertically to represent Shiva and Parvati worshipped as one form. It is considered one of the oldest temples in this region.

Borewells and Textile are the main business in Tiruchengode. Lorry body building is famous in this place. 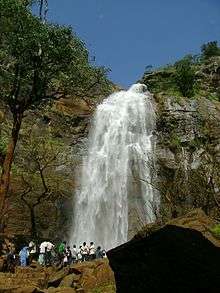 Kolli Hills are situated on Eastern Ghats at an altitude of 1200 mts in the Namakkal District and are 45 km from Namakkal town. The hills are known for medicinal herbs and plants that grow in abundance on their slopes. The Arapaleswarar Temple, the Horticulture Farm, the Herbal Farm, Agaya Gangai waterfalls, Boat house, Peryaswamy Temple, Ettukai Amman Temple, Pineapple farms, View Point, and the Telescope House are the places to visit for the interested tourist. Attukalkilangu soup and raw was sold in this hills. The Valvil Ori festival is organised here every year during the month of August.[8]

Transport is the major field of work in Namakkal. A large number of bulk carriers and lorries run through all over India from Namakkal. A lot of lorry (truck) body building workshops are located in Namakkal. Egg production in this district is large, so transport facilities are good. It is the main centre for linking other districts via bus routes, especially to the North side (Salem, Villupuram, Dharmapuri, Krishnagiri, Bangalore), East side (Tiruchirapalli, Thanjavur), South side (Karur, Dindugal, Madurai, Tiunelveli, Kanyakumari) and the West side (Erode, Coimbatore, Tirupur, Udhagamandalam (Ooty))

Natarajan Chandrasekaran is the Chairman and Managing Director of Tata Consultancy Services. He hails from Mohanur in Namakkal District.