This article is about the District. For its eponymous headquarters, see Kanchipuram.

Kanchipuram district (Tamil: காஞ்சிபுரம் மாவட்டம்) is a district in the northeast of the state of Tamil Nadu in India. In Early Days Chengalpattu is called as the District. In Later Kanchipuram is considered as a District. It is bounded in the west by Vellore District and Thiruvannamalai District, in the north by Tiruvallur District and Chennai District, in the south by Viluppuram District and in the east by the Bay of Bengal. It lies between 11° 00' to 12° 00' latitudes and 77° 28' to 78° 50' longitudes. The district has a total geographical area of 4,432 km2 (1,711 sq mi) and coastline of 57 km (35 mi). The town of Kanchipuram is the district headquarters. The Chennai International Airport is located in Tirusulam in Kanchipuram district now under Greater Chennai Corporation Limit. In 2011, Kancheepuram district had a population of 3,998,252, with a sex-ratio of 986 females for every 1,000 males.

The district produces over 15,000 engineering graduates every year, same as Gujarat state.[1] 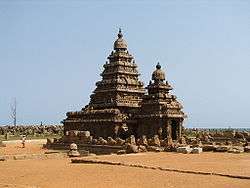 The Shore Temple in Mahabalipuram - a UNESCO World Heritage Site

The history of Kanchi can be traced back to several centuries BCE. The place finds its name in Patanjali's Mahabhashya, written in the 2nd century BC. Manimekalai, the famous Tamil classic, and Perumpanattu Padai, a great Tamil poetical work, vividly describe Kanchipuram city, as it was at the beginning of the Christian era.

Kancheepuram District had been administered by the Pallavas, Cholas, Vijayanagar rulers and the British before Independence. It was a part of Tondaimandalam roughly comprising the present day districts of Kancheepuram, Chennai, Tiruvallur, Vellore and Thiruvannamalai. The capital of Thondaimandalam was Kancheepuram city. From the 3rd to the 9th century AD. Kanchi was the capital of the Pallavas who ruled over the territory extending from the river Krishna in the north to the river Kaveri in the south. The Pallavas fortified the city with ramparts, moats, etc., with wide and well laid out roads and fine temples. They were a great maritime power with contacts with far-off China, Siam, Fiji, etc., through their chief Port Mamallapuram (Mahabalipuram). The Cholas ruled this region from the 10th century to the 13th century. Kings of Vijayanagar dynasty ruled from the 14th century to the 17th century.

Kanchi was a major seat of learning as well as an important place of pilgrimage for Buddhists, Jains and Hindus. Daṇḍin has described it to be the best among the cities (Nagareshu Kanchi), just as Jati (jasmine) is the sweetest amongst the flowers, Rambha the most beautiful amongst women and Grihasthasrama the most ideal amongst the four asramas of human life. One of the kings of Kanchi, Mahendravarman-I, was a great scholar and musician, a man of great intelligence and also a great playwright. Yuan Chwang, the great Chinese traveler, visited Kanchipuram city in the 7th century and said that this city was 6 miles in circumference and that its people were famous for bravery and piety as well as for their love of justice and veneration for learning. He further recorded that Buddha had visited the place. As regards learning, Kanchi stood second in glory only to Banaras. Once the seat of learning and religious fervour, it started its climb down with the Mughal invasions followed by three centuries of colonial rule under the British. 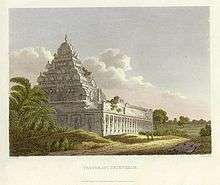 An 1811 engraving of a temple in Kanchipuram

The British coined the name Conjeevaram, the anglicised version of Kancheepuram. Under the British regime, a Collector to the district was appointed for the first time in 1788 AD. The district was further split up into two divisions, Northern and Southern, and was placed under the administration of two Collectors. The Collectors during the 1790s were Clerk and Balfour. Lionel Place, the Collector in 1794-1799, created the posts of Sharistadars, who came under the control of the Collector. Clerks were also appointed to assist the Sharistadars. The famous Madurantakam and Uthiramerur tanks were created by Place. Hodgson, who was Head Assistant to Place, succeeded him as the Collector. The place he resided at Kancheepuram is still known in the name of Hodgsonpet. In 1800, Hodgson was succeeded by his Senior Assistant, Greenway.

In the 19th century, Karunguzhi became the headquarters of the district and it remained so up to 1859 when it was shifted to 'Home Garden' Saidapettai, except for a short spell from 1825-1835 during which Kancheepuram served as the district headquarters. From 1859 to 1968, the Collector's office was located in Saidapettai.

Kancheepuram district is situated on the North East coast of Tamil Nadu. It is bound by Bay of Bengal in the East, Vellore and Thiruvannamalai districts in the west, Thiruvallur and Chennai districts in the north, and Villuppuram district in the south. It lies between 11° 00' to 12° 00' latitudes and 77° 28' to 78° 50' longitudes. The district has a total geographical area of 4,43,210 hectares and a coastline of 57 km. The table below shows the maximum and minimum temperatures experienced in the district during different seasons.

The pre-monsoon rainfall is almost uniform throughout the district. The coastal regions receive more rainfall than the interior ones. The district is mainly dependent on the monsoon rains. Failure of monsoon leads to distress condition. Northeast and Southwest monsoon are the major donors, with 54% and 36% contribution each to the total annual rainfall. During normal monsoon, the district receives a rainfall of 1200 mm.

The Palar river is the most important river running through the district. Through most of the year it remains dry, attributed to the construction of dams across the river in Andhra Pradesh. There are only a few hills of considerable elevation in the district. The southern part of Maduranthakam taluk contains small hills. The total forest area in the district is 23,586 hectares.

Below Taulks are Part Of Chennai city Region: 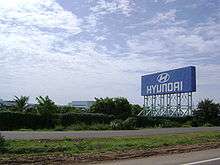 Kancheepuram is also known as 'Silk City' and 'Temple City', since one of the main professions of the people living in and around is weaving silk sarees. The silk weavers of Kanchi settled more than 400 years ago and have given it an enviable reputation as the producer of the best silk sarees in the country.

Kanchipuram is also one of the most industrialized districts in the country, kanchipuram district has a many automobile manufacture such as Hyundai, Nissan, ford, BMW, Daimler, Yamaha etc. thanks to its proximity to the state capital Chennai. Areas surrounding Sriperumbudur have turned out to become one of the largest manufacturing hubs of India. The district is home to the manufacturing units of Hyundai, Ford, Mitsubishi, Nokia, Samsung, Dell, Saint Gobain, etc. The district is also at the center of the Information Technology boom in India. Many multinational IT companies like Tata Consultancy Services (TCS), Infosys, Wipro Technologies, Cognizant Technology Solutions, etc. have set up their offices in Kanchipuram district. TCS and Infosys have built huge offices with capacities of 22,000 and 25,000 employees, respectively.

Kanchipuram is known as the "city of a thousand temples". The 192 feet high temple tower of Ekamabaranadhar temple and the 100-pillar mandabam (building) in Varadaraja Perumal temple in this town are famous, and are considered marvels of the architectural techniques of the Vijayanagara dynasty. The British Viceroy Robert Clive, who is responsible for the British rule in India, had exclaimed the architectural techniques of Varadharaja perumal temple and presented a fabulous jewelry to this temple. Today, apart from its temples, this small town is also known for its thriving handloom industry. The city is quite famous for its silk sarees, considered to be one of the best varieties of silk sarees. Walajapet near Kanchipuram is also famous for silk saree weaving. it will be known as "kanchi kamakshi amman temple"

Vedanthangal is one of India's main water-bird sanctuaries, 48 km from Kanchipuram. Storks, egrets, cormorants, darters, flamingos, pelicans, moorhens, herons, kingfishers, sandpipers, white ibis, spoonbills, swans and grey wagtails are some of the birds which visit seasonally. Between October and March, many migratory birds visit. The birds can be viewed from the bank or from the watch tower.

Muttukadu is a large lake formed out of the backwaters from Bay of Bengal. It has boating and wind surfing facilities. It is located at a distance of 80 km from Kanchipuram. The backwaters of Muttukkadu have been developed by the Tamil Nadu Tourism Development Corporation to serve as a picnic spot and a center for water sports. Training and demonstration programmes are also organised for beginners.

Mahabalipuram was a flourishing port town during the time of Pallavas. This is one of the main tourist places in Kanchipuram. The monuments of Mahabalipuram are an excellent specimen of Dravidian temple architecture and Pallava art. The group of sculptures in Mahabalipuram are listed out by UNESCO as World Heritage Sites.

This is a small fishing village 40 km from Chennai on the Mahabalipuram road. There are the remains of a fort, which now functions as a luxury beach resort. Facilities for windsurfing and swimming are available here. A dargah and an ancient church are also located here. 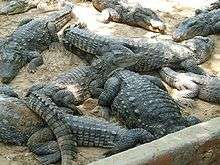 DakshinaChitra has relocated 18th, 19th and early 20th century houses and re-created village streets and work places providing authentic insights into the domestic architecture, spatial organisation, life-styles and character of the essential Tamil or Keralite or Andhrite or Kannadiga.

The Madras Crocodile Bank, a crocodile breeding center, is located about 14 km from Mamallapuram. At this center, about 5000 crocodiles of 6 different species, alligators and other reptiles are bred in captivity, kept in open, marshy enclosures. There is also a snake farm where anti-venom is produced and there is a regular venom extraction show.[10]