Harajuku Station (原宿駅, harajuku-eki) is a railway station in Shibuya, Tokyo, Japan, operated by East Japan Railway Company (JR East). The station takes its name from the area on its eastern side, Harajuku.

This station is served by the circular Yamanote Line. It is also adjacent to Meiji-Jingumae Station on the Tokyo Metro Chiyoda and Fukutoshin Lines, and is marked as an interchange on most route maps, although there is no physical connection between the two stations. 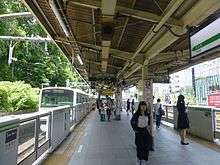 The station consists of a single island platform serving two tracks. An additional temporary platform is located on the west side of the station usable by trains traveling towards Shinjuku which is used when major events occur in the area, especially around New Year when many people visit Meiji Shrine.

The main entrance is at the southern end of the station. A smaller entrance leading to the centre of the platform is convenient for Takeshita Street, a famous area in Harajuku. Takeshita Street is a popular shopping street and the Takeshita Street entrance to Harajuku Station is often very crowded. This congestion creates a bottleneck on weekends when scores of tourists and locals arrive and leave the shopping areas in and around Takeshita Street. 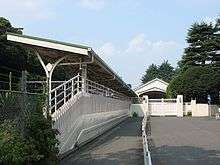 Outside of the Imperial train platform

To the north of the station there is a separate platform serving a loop on the east side of the freight line for use by the Imperial train. The platform has not been used since 2001, in part because the opening of the Shonan-Shinjuku Line has made it more difficult to schedule special charters on the Yamanote Line corridor (the most recent use of the official Imperial train, in 2008, was to and from Ueno Station). The points, signals and rails incidental to the platform are in disrepair, making it impossible to use the platform without some refurbishment.[1]

Platform edge doors were installed on the platforms in November 2014, and brought into operation from December.[2]

The station is set to be rebuilt by JR East, in time for the 2020 Summer Olympics. A new station building is expected to be built at the station's Meiji-Jingu entrance, and the temporary platform used during busy periods will become the permanent platform for trains heading north through the station.[3][4] It has not been determined if the old station building at the Takeshita entrance will be retained.[5]

In June 2016, JR East announced plans to rebuild the station ahead of the 2020 Olympics due to alleviate overcrowding.[7]