Ōsaki Station is served by the following JR East lines.

It also forms the northern starting point of the TWR Rinkai Line to Shin-Kiba. Most Saikyō Line trains operate through to Shin-Kiba on the Rinkai Line. 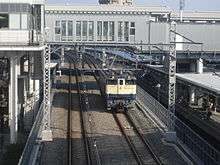 The station has a "Midori no Madoguchi" staffed ticket office. Toilet facilities are located inside the ticket barriers, close to the north gate.

The station opened on February 25, 1901 as a station of Nippon Railway, which was nationalized in 1906. After serving the Yamanote Line for a century, on December 1, 2002 new platforms for the Saikyō Line, the Rinkai Line and the Shōnan-Shinjuku Line opened on the west side of the station.

This article is issued from Wikipedia - version of the 1/14/2016. The text is available under the Creative Commons Attribution/Share Alike but additional terms may apply for the media files.