Shibuya Station (渋谷駅, Shibuya-eki) is a railway station in Shibuya, Tokyo, Japan, operated jointly by East Japan Railway Company (JR East), Keio Corporation, Tokyu Corporation, and Tokyo Metro. With 2.4 million passengers on an average weekday in 2004, it is the fourth-busiest commuter rail station in Japan (after Shinjuku, Ikebukuro, and Ōsaka / Umeda) handling a large amount of commuter traffic between the center city and suburbs to the south and west.[1]

Shibuya station is currently undergoing major renovations as a part of a long-term site redevelopment plan.[2] While all rail and subway lines continue to operate, some station exits and entrances are subject to change. The east side of the main station has since March 2013 been transformed due to the provision of through train services between the Tokyu Toyoko Line and the Tokyo Metro Fukutoshin Line. While much of the main station building, previously housing the Tokyu department store has been closed and is set for demolition, the west building of the Tokyu department store continues to operate as before. The Shibuya Hikarie building, also owned by the Tokyu Group was opened in 2012 and features department store retail, restaurants and offices.

There are six exits from the main JR/Tokyu/Tokyo Metro complex. The Hachikō Exit (ハチ公口, Hachikō-guchi) on the west side, named for the nearby statue of the dog Hachikō and adjacent to Shibuya's famous scramble crossing, is a particularly popular meeting spot. The Tamagawa Exit (玉川口, Tamagawa-guchi) on the west side leads to the Keiō Inokashira Line station.

On November 17, 2008, a mural by Tarō Okamoto, "The Myth of Tomorrow", depicting a human figure being hit by an atomic bomb, was unveiled in its new permanent location at the station, in the connecting passage to the Keio Inokashira Line entrance.

There is one underground island platform on the third basement (B3F) level, serving two tracks.

Shibuya Station first opened on March 1, 1885 as a stop on the Shinagawa Line, a predecessor of the present-day Yamanote Line. The station was later expanded to accommodate the Tamagawa Railway (1907; closed 1969), the Toyoko Line (1927), the Teito Shibuya Line (1 August 1933; now the Inokashira Line),[5] the Tōkyō Rapid Railway (1938; began through service with the Ginza Line in 1939 and formally merged in 1941), the Den-en-toshi Line (1977), the Hanzōmon Line (1978) and the Fukutoshin Line (2008). Between 1925 and 1935, an Akita dog named Hachiko waited for his deceased owner, appearing at the station right when his train was due. In 1946 the infamous Shibuya incident, a gang fight involving hundreds of people, occurred in front of the station.

From 22 February 2013, station numbering was introduced on Keio lines, with Shibuya Station becoming "IN01".[10]

The former above-ground Tokyu Toyoko Line terminal station platforms were taken out of use after the last train service on 15 March 2013. From the start of the revised timetable on 16 March 2013, Toyoko Line services used the underground platforms 3-6 shared with Tokyo Metro Fukutoshin Line services.

JR East is in the process of rebuilding the station, with reconstruction work starting in earnest in fiscal 2015.[3] When completed, the Yamanote Line will be served by an island platform instead of the current separated side platform arrangement, and the Saikyo Line platforms, currently approximately 350 m away, will be moved alongside the Yamanote Line platforms to make interchanging easier.[3]

Tokyu Corporation plans to develop a 47-story commercial building atop the relocated Toyoko Line platforms to the east of the station, which will become the tallest building in Shibuya upon its opening in 2019. Tokyu also plans to open a 16-story commercial/residential complex at the station in 2018, followed by a 35-story building on the site of the former Toyoko Line terminal in 2020.[11] 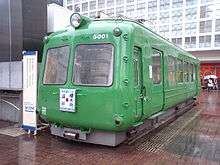 Bus terminal on the west side of Shibuya Station
See also: Shibuya, Tokyo

Around the station is the commercial center of Shibuya. The Tokyu Department Store is connected to the east gate of the station and several other department stores are within walking distance.

The Shibuya River flows directly under the station, to the east and parallel to the JR tracks. Unlike most other Japanese department stores, the east block of Tokyu Department Store, closed in 2013 and due for demolition as a part of the Shibuya Station redevelopment plan, did not have basement retail space due to the river passing directly underneath. An escalator in the east block of the store was constructed over the river stops a few steps above floor level to make space for machinery underneath without the need for further excavation. Rivers are deemed public space under Japanese law, so building over one is normally illegal. It is not clear why this was allowed when the store buildings were first constructed in 1933.