Shin-Ōkubo Station (新大久保駅, Shin-Ōkubo-eki) is a railway station on the Yamanote Line in Shinjuku, Tokyo, Japan, operated by East Japan Railway Company (JR East).[1] Opened on November 15, 1914, it is close to the large local Korean ethnic neighborhood. Shin-Ōkubo Station has only one exit.

Shin-Ōkubo Station is served by the circular Yamanote Line, with trains running every four minutes during the daytime off-peak. It is one of only two stations on the Yamanote Line that does not provide a direct connection to any other line, the other being Mejiro Station. 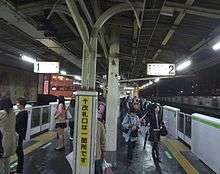 Platform edge doors are scheduled to be installed on the Yamanote Line platforms during fiscal 2013.[2]

Less than a kilometer north of the sprawling Shinjuku Station, Shin-Ōkubo Station is located approximately 5 minutes' walk from Shinjuku's Kabukichō district. It is also about a 3-minute walk from Ōkubo Station on the Chūō-Sōbu Line.

Near the station, Okubo-dori (Okubo street) and surrounding side streets are lined with all kinds of small shops, most of them selling Korean food and pop-culture items. Also in the vicinity are Korean-themed bars, nightclubs, and restaurants.[3]

During the late 1940s, while Seibu Railway was planning the extension of the Seibu Shinjuku Line from Takadanobaba to Shinjuku, Seibu planned to open a station at Shin-Okubo. Among several plans considered, one option called for the existing JR station to be moved to the west and for Seibu to take over the existing station. Toyama Park, at that time under US occupation, was being considered as a location for a new freight yard, and the rerouting of the Yamanote and Seibu lines was intended to accommodate freight traffic to and from the new yard. However, the freight yard plan was later abandoned, and the Seibu extension opened in 1952 with no stop at Shin-Okubo.[4]

On 26 January 2001, a 47-year-old photographer from Yokohama and a 26-year-old Korean student died at the station when they were hit by a Yamanote Line train while trying to save a drunken Japanese man who had fallen off the platform onto the tracks and also killed in the accident.[9] The Korean student's life story formed the basis for the film 26 Years Diary, released in 2007 in Japan and in 2008 in Korea.