Ikebukuro Station (池袋駅, Ikebukuro-eki) is a major railway station located in the Ikebukuro district of Toshima, Tokyo, Japan, shared by East Japan Railway Company (JR East), Tokyo subway operator Tokyo Metro, and the two private railway operators Seibu Railway and Tobu Railway. With 2.71 million passengers on an average daily in 2007, it is the second-busiest railway station in the world (after Shinjuku Station), and the busiest station in the Tobu, Seibu, and Tokyo Metro networks. It primarily serves commuters from Saitama Prefecture and other residential areas northwest of the city centre. It is the Tokyo terminal of the Seibu Ikebukuro Line and the Tobu Tojo Line.

Ikebukuro Station has two main entrances, the East exit and the West exit. There are a number of other secondary entrances such as the JR North exit, the various Seibu exits. and multiple subway exits.

The Marunouchi Line and Yurakucho Line run east/west two stories underground, while the Tokyo Metro Fukutoshin Line is four stories underground to the west of the main station complex. The latter line runs south toward Shinjuku and Shibuya along Meiji-dori, and offers through services to Motomachi-Chūkagai Station in Yokohama via the Tokyu Toyoko Line and Minatomirai Line.

Chest-high platform edge doors have been introduced on the Yamanote Line platforms since 2 March 2013.[2]

The Tobu station has three terminating tracks served by platforms 1 to 5, arranged as shown in the diagram on the right.

Platforms 3 and 5 are normally used for disembarking passengers, although platform 5 is also used for passengers boarding the evening TJ Liner services, which require payment of a supplementary fare. From 14 June 2015, the departure melodies used when trains are about to depart from the station are to be changed to classical themes, with "Allegro" from "Divertimento in D major, K. 136" by Mozart used for platforms 1/2, "Menuetto" from "Eine kleine Nachtmusik" by Mozart used for platforms 3/4, and "Allegro ma non troppo" from the "Pastoral Symphony" by Beethoven used for TJ Liner services departing from platform 5.[3]

Platforms 1, 4, and 6 are normally used for disembarking passengers only. 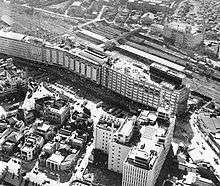 Ikebukuro Station in the early 1960s

The station was opened on April 1, 1903 by the Japanese Government Railways (JGR). The Tōjō Railway Line (present-day Tobu Tojo Line) station opened on 1 May 1914 with the opening of the 33.5 km line to Tanomosawa (田面沢駅) in Saitama Prefecture (located between the present stations of Kawagoeshi and Kasumigaseki).[5] As the Tokyo terminus of the line was originally planned to be at Shimo-Itabashi, Ikebukuro Station is to this day marked by km post "-1.9" (the distance from Shimo-Itabashi Station where the "0 km" post for the line is located).[5]

Tobu opened a department store adjoining its station on 29 May 1962.[5] Around the same time, the Tobu station platforms were expanded with three tracks.[5]

In March 1992, automatic ticket barriers were installed at the north exit of the Tobu Station, and in June of the same year, the Tobu Department Store was expanded with the addition of the Metropolitan Plaza annex located on the south side.[5]

In June 2008, the Tobu station ticket barriers were colour-coded into three "zones": North, Central, and South.[5]

The figures below are the official number of passengers entering and exiting each day released by each train operator.

Annual passenger figures for the station between fiscal 1903 and 1965 are as shown below. Note that the figures only consider boarding passengers and a blank indicates that no data is available. 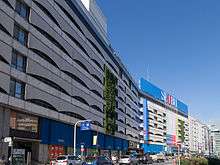 The east side of the station and Seibu Department Store building, November 2012