Nishi-Nippori Station is served by the following lines. 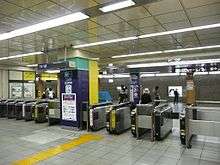 The ticket barriers for transferring between JR East and the Tokyo Metro Chiyoda Line, July 2008 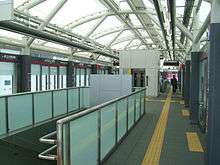 The Nippori-Toneri Liner station is elevated and consists of a single island platform serving two tracks.