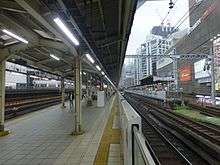 The Yamanote Line and Keihin-Tohoku Line platforms in September 2016

Yūrakuchō is served by the JR East Keihin-Tōhoku Line and Yamanote Line, and the Tokyo Metro Yurakucho Line subway. On Tokyo subway maps, nearby Hibiya Station is marked as an interchange and is linked to Yurakucho by underground passages.

Chest-high platform edge doors were installed on the Yamanote Line platforms in July 2014, with operation scheduled to begin on 30 August 2014.[1]