Akihabara Station (秋葉原駅, Akihabara-eki) is a railway station in Tokyo's Chiyoda ward. It is at the center of the Akihabara shopping district specializing in electronic goods.

Akihabara Station is served by the following lines. JR East:

The above-ground section of the station is cross-shaped, with the Chūō-Sōbu Line tracks running from east to west, and the Yamanote and Keihin-Tohoku Line (and Tohoku Shinkansen, which does not stop at Akihabara) from north to south. Chest-high platform edge doors were installed on the Yamanote Line platforms in May 2015, to be brought into operation from 20 June 2015.[1] 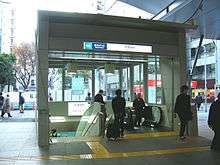 There are two underground side platforms serving two tracks.

The song "Koi Suru Fortune Cookie" by AKB48 is to be used as the departure melody on the Hibiya Line platforms from spring 2016.[2]

There is an underground island platform serving two tracks.

Akihabara Station was opened in November 1890 as a freight terminal linked to Ueno Station via tracks following the course of the modern day Yamanote Line.

It was opened to passenger traffic in 1925 following the construction of the section of track linking Ueno with Shinbashi via Tokyo Station and the completion of the Yamanote Line. The upper level platforms were added in 1932 with the opening of an extension to the Sōbu Line from its old terminal at Ryōgoku to Ochanomizu, making Akihabara an important transfer station for passengers from the east of Tokyo and Chiba Prefecture.

The huge growth in commuter traffic following the Second World War caused considerable congestion and was only relieved with the construction of the Sōbu line tunnel linking Kinshichō with Tokyo, bypassing Akihabara.

The Hibiya Line subway station was opened on May 31, 1962 with the line's extension from Naka-Okachimachi to Ningyōchō.

On August 24, 2005, the underground terminus of the new Tsukuba Express Line opened at Akihabara. The entire station complex, including the JR station, was also refurbished and enlarged in preparation for the opening of the Tsukuba Express.[4]

The main attraction is the Akihabara electronics retail district to the north and west of the station.