This article is about the Harvard College daily student newspaper. For the Harvard athletic program, see Harvard Crimson.

The Harvard Crimson, the daily student newspaper of Harvard University, was founded in 1873.[1] It is the only daily newspaper in Cambridge, Massachusetts,[2] and is run entirely by Harvard College undergraduates. Many Crimson alumni have gone on to careers in journalism, and some have won Pulitzer Prizes. 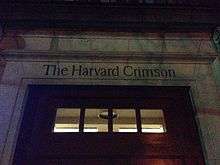 Any student who volunteers and completes a series of requirements known as the "comp" is elected an editor of the newspaper.[3] Thus, all staff members of The Crimson—including writers, business staff, photographers, and graphic designers—are technically "editors". (If an editor makes news, he or she is referred to in the paper's news article as a "Crimson editor", which, though important for transparency, also leads to characterizations such as "former President John F. Kennedy '40, who was also a Crimson editor, ended the Cuban Missile Crisis.") Editorial and financial decisions rest in a board of executives, collectively called a "guard", who are chosen for one-year terms each November by the outgoing guard. This process is referred to as the "turkey shoot" or the "shoot". The unsigned opinions of "The Crimson Staff" are decided at tri-weekly meetings that are open to any Crimson editor (except those editors who plan to write or edit a news story on the same topic in the future).

The Crimson is almost the only college newspaper in the U.S. that owns its own printing presses. At the beginning of 2004 The Crimson began publishing with a full-color front and back page, in conjunction with the launch of a major redesign. The Crimson also prints over fifteen other publications on its presses.

Crimson alumni include Presidents John F. Kennedy of the Class of 1940 (who served as a business editor) and Franklin D. Roosevelt (who served as president of the newspaper), Class of 1904. Writer Cleveland Amory was president of The Crimson; when Katharine Hepburn's mother asked him what he planned to do after college, he says he replied teasingly that "once you had been president of The Harvard Crimson in your senior year at Harvard there was very little, in after life, for you."[7]

Currently, The Crimson publishes two weekly pullout sections in addition to its regular daily paper: an Arts section on Tuesdays and a magazine called Fifteen Minutes on Thursdays.

The Crimson is a nonprofit organization that is independent of the university. All decisions on the content and day-to-day operations of the newspaper are made by undergraduates. The student leaders of the newspaper employ several non-student staff, many of whom have stayed on for many years and have come to be thought of as family members by the students who run the paper.

The Crimson traces its origin to the first issue of The Magenta, published January 24, 1873, despite strong discouragement from the Dean. The faculty of the College had suspended the existence of several previous student newspapers, including the Collegian, whose motto Dulce et Periculum ("sweet and dangerous") represented the precarious place of the student press at Harvard University in the late nineteenth century. The Magenta's editors declined Dean Burney's advice and moved forward with a biweekly paper, "a thin layer of editorial content surrounded by an even thinner wrapper of advertising".

The paper changed its name to The Crimson in 1875 when Harvard changed its official color by a vote of the student body—the announcement came with a full-page editorial announcing "magenta is not now, and ... never has been, the right color of Harvard." This particular issue, May 21, 1875, also included several reports on athletic events, a concert review, and a call for local shopkeepers to stock the exact shade of crimson ribbon, to avoid "startling variations in the colors worn by Harvard men at the races".

The Crimson included more substance in the 1880s, as the paper's editors were more eager to engage in a quality of journalism like that of muckraking big-city newspapers; it was at this time that the paper moved first from a biweekly to a weekly, and then to a daily in 1883.

In 1885, The Crimson switched from a fortnightly publication to a daily newspaper.[9]

The paper flourished at the beginning of the twentieth century with the acquisition of its own and current building on Plympton Street in 1915, the purchase of Harvard Illustrated Magazine and the establishment of the editorial board in 1911.[10] The Illustrated's editors became Crimson photographers, and thereby established the photographic board. The addition of this and the editorial board brought the paper to become, in essence, the modern Crimson. The newspaper's president no longer authored editorials single-handedly, and the paper took stronger editorial positions.

The 1930s and 1940s were dark years for The Crimson; reduced financial resources and competition from a publication established by ex-editors meant serious challenges to the paper's viability. In 1943, the banner on the paper read Harvard Service News and the stories focused almost exclusively on Harvard's contribution to the war effort. Under the authority of so-called wartime administrative necessity, alumni discouraged the Service News from editorializing. The paper was administered during the war by a board of University administrators, alumni, and students.

In 1934, The Crimson defended a proposal by Adolf Hitler's press secretary, Ernst F. Sedgwick Hanfstaengl, to donate to Harvard a prize scholarship to enable a Harvard student to attend a Nazi university. The Harvard Corporation voted unanimously to refuse the offer: "We are unwilling to accept a gift from one who has been so closely identified with the leadership of a political party which has inflicted damage on the universities of Germany through measures which have struck at principles we believe to be fundamental to universities throughout the world." The Crimson defended it, "That political theories should prevent a Harvard student from enjoying an opportunity for research in one of the world's greatest cultural centers is most unfortunate and scarcely in line with the liberal traditions of which Harvard is pardonably proud."[11]

The paper went back to its civilian version in 1946, and as the Army and Navy moved out of Harvard, The Crimson grew larger, more financially secure, more diversified, and more aware of the world outside the campus during the early Cold War era than its pre-WWII predecessor had been.

The paper, although financially independent and independent of editorial control by the Harvard University administration, was under the University's administrative control insofar as it was composed of university students who were subject to the university's rules. Radcliffe women on staff were forced to follow curfews to which Harvard men were not subject, and that interfered greatly with the late hours required in producing a newspaper. Throughout the 1950s, The Crimson and various university officials exchanged letters debating these restrictions. Crimson editors pushed for later curfews for their female writers, who grew increasingly important in day-to-day operations. Under president Phillip Cronin '53, women became staff members rather than Radcliffe correspondents.

Crimson writers were involved in national issues, especially when anti-communist investigative committees came to Harvard. Future Pulitzer Prize–winning writer Anthony Lukas' stories (most notably, an interview with HUAC witness Wendell H. Furry) were sometimes picked up by the Associated Press. Not even a staff writer yet, Lukas had arrived at the university with Joseph McCarthy's home number in his pocket. His father was an opponent of McCarthy's and a member of the American Jewish Committee, the group that produced Commentary magazine.

The Harvard Crimson, Inc. was incorporated as a nonprofit Massachusetts corporation in 1966; the incorporation was involuntarily revoked, then revived, in 1986.[12]

In 1991, student reporters for The Crimson were the first to break the news that Harvard had selected former Princeton Provost Neil Leon Rudenstine to succeed Derek Bok as President of the university. The reporters, who had learned of a secret meeting in New York, got their confirmation when they approached a surprised Rudenstine on his plane ride back to Boston. The story appeared in an extra bearing the dateline "Somewhere Over New England". Crimson editors repeated the scoop in 2001, beating out national media outlets to report that Lawrence Summers would succeed Rudenstine, and again in 2007, being the first to report Drew Gilpin Faust's ascension to the presidency.[13]

Throughout the 1990s, there was a great deal of focus on making the staff of the paper more inclusive and diverse. Over time, a financial aid program was instituted to try to address the problem of a lack of socio-economic diversity. Today, some 90 editors participate in the financial aid program every semester.

On January 12, 2004, The Crimson printed its first color edition after obtaining and installing 4 new Goss Community color presses. The date also marked the unveiling of a major redesign of the paper itself.

In 2004, The Crimson filed a lawsuit against Harvard University to force the Harvard University Police Department to release more complete records to the public. The case was heard before the Massachusetts Supreme Judicial Court in November 2005. In January 2006, the court decided the case in favor of the University.

In November 2005, The Crimson had its records subpoenaed by ConnectU, a firm suing Facebook, its better-known competitor. The Crimson challenged the subpoena, and said that it would not comply with ConnectU's demands for documents.

On April 23, 2006, The Crimson was the first to allege that portions of Harvard student Kaavya Viswanathan's highly publicized debut young adult novel How Opal Mehta Got Kissed, Got Wild, and Got a Life had been plagiarized from two bestselling books by novelist Megan McCafferty.[14][15][16] Further allegations were later made that Viswanathan's novel had drawn inappropriately from other novels as well.[14][15][16]

Publications (from The Staff of The Harvard Crimson)