Hatha yoga is associated with the Dashanami Sampradaya and the mystical figure of Dattatreya.[3]

In the 20th century, hatha yoga, particularly asanas (the physical postures), became popular throughout the world as a form of physical exercise, and is now colloquially termed as simply "yoga". 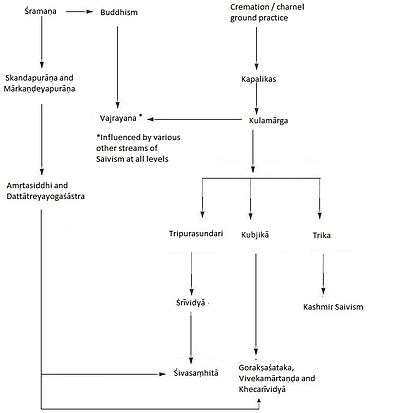 According to Mallinson, some Hatha Yoga techniques can be traced back to the epics and the Pali canon.[1] The Pali canon contains three passages in which the Buddha describes pressing the tongue against the palate for the purposes of controlling hunger or the mind, depending on the passage.[7] However there is no mention of the tongue being inserted into the nasopharynx as in true khecarī mudrā. The Buddha used a posture where pressure is put on the perineum with the heel, similar to even modern postures used to stimulate Kundalini.[8]

In medieval times, teachings on Yoga were systematized in several texts:

The practices of the Amṛtasiddhi and Dattātreyayogaśāstra are used to raise bindu or prevent it from falling.[1] The mudrās of the Vivekamārtaṇḍa work on bindu, not kuṇḍalinī, even though raising it is an important part of the yoga it teaches.[1] The mudras of the Goraksaśatakạ and Khecarīvidyā are used to raise kuṇḍalinī (they mention bindu only in passing).[1]

The Hathapradīpikạ was composed by Svātmārāma in the 15th century CE as a compilation of the earlier hatha yoga texts.[1]

The Hatha Yoga Pradipika and the Gheranda samhita are derived from older Sanskrit texts. In Hatha Yoga Pradipika, Swatmarama introduces his system as preparatory stage for physical purification that the body practices for higher meditation or Yoga. It is based on asanas (postures) and pranayama (breathing techniques).

Many modern schools of hatha yoga in the West derive from the school of Tirumalai Krishnamacharya, who taught from 1924 until his death in 1989. Among his students prominent in popularizing yoga in the West were K. Pattabhi Jois famous for popularizing the vigorous Ashtanga Vinyasa Yoga style, B. K. S. Iyengar who emphasized alignment and the use of props, Indra Devi and Krishnamacharya's son T. K. V. Desikachar.

Another major stream of influence within and outside India has been Swami Sivananda of Rishikesh (1887–1963) and his many disciples including, among others, Swami Vishnu-devananda – founder of International Sivananda Yoga Vedanta Centres; Swami Satyananda – of the Bihar School of Yoga; and Swami Satchidananda of Integral Yoga. In India, Baba Ramdev of Haridwar has popularized yoga among the masses in the 21st century.

In Sierra Leone, the "Yoga Strength" organization headed by Tamba Fayia, a former child soldier who has become "the country's first qualified yoga teacher", focuses on "taking yoga to the people who need it ... on the streets, in the slums, in the schools."[9]

False association with the Nath

According to British indologist James Mallinson, some scholars have been falsely associating hatha yoga with the Nath, Matsyendranath and Gorakshanath. In actuality hatha yoga is associated with the Dashanami Sampradaya and the mystical figure of Dattatreya.[10]

Hatha yoga has some important principles and practices that are shared with other methods of yoga, such as subtle physiology, dhāraṇā (fixation of the elements), and nādānusandhāna (concentration on the internal sound).[1]

In its earliest formulations, hathạ was used to raise and conserve the physical essence of life, identified in men as bindu (semen), which is otherwise constantly dripping downward from a store in the head and being expended.[1] The female equivalent, mentioned only occasionally in our sources, is rajas, menstrual fluid.[1] The preservation and sublimation of semen was associated with tapas (asceticism) from at least the time of the epics, and some of the techniques of early Hatha Yoga are likely to have developed as part of ascetic practice.[1] The techniques of early Hatha Yoga work in two ways: mechanically, in practices such as viparītakaraṇī, “the reverser,” in which by standing on one’s head one uses gravity to keep bindu in the head; or by making the breath enter the central channel of the body (sushumna), which runs from the base of the spine to the top of the head, thereby forcing bindu upward.[1]

In later formulations of Hatha Yoga, the Kaula system of the visualization of the serpent goddess Kuṇḍalini rising as kuṇḍalinī energy through a system of chakras, usually six or seven, is overlaid onto the bindu-oriented system.[1] The same techniques, together with some specifically kuṇḍalinī-oriented ones, are said to effect kuṇḍalinī’s rise up the central channel (which is called the sushumnạ̄ in these traditions) to a store of amṛta (the nectar of immortality) situated in the head, with which kuṇḍalinī then floods the body, rejuvenating it and rendering it immortal.[1]

The aims and results of Hatha Yoga are the same as those of other varieties of yoga practice: siddhis (both mundane benefits and magical powers) and moksha, the latter often understood as being attained in a body immortalized by Hatha Yoga practices.[1] In keeping with the physical orientation of Hatha Yoga practices, its siddhis are predominantly physical, ranging from the loss of wrinkles and grey hair to divine sight or the ability to levitate.[1] In common with earlier formulations of yoga, in particular Kaula ones, the techniques of Hatha Yoga can be used to effect kālavañcana (cheating death), utkrānti (yogic suicide), or parakāyapraveśa (entering another’s body).[1] As in the Yoga Sutras of Patanjali, siddhis are usually said to be a hindrance to or distraction from Hatha Yoga’s ultimate aim – liberation – but in some Kaula-influenced texts, the pursuit of specific siddhis through specific techniques is taught.[11] 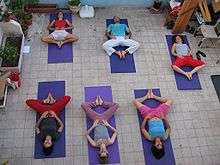 The 2012 "Yoga in America" survey, conducted by Harris Interactive on behalf of Yoga Journal, shows that the number of adult practitioners in the US is 20.4 million, or 8.7 percent. The survey reported that 44 percent of those not practicing yoga said they are interested in trying it.[13]