For the book by Swami Vivekananda, see Karma Yoga (book). 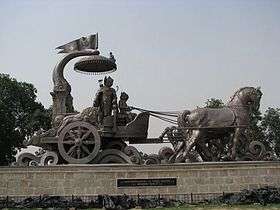 Bronze statue representing the discourse of Krishna and Arjuna, in Kurukshetra

Karma yoga, or the "Yoga of action"[1] is a form of yoga based on the teachings of the Bhagavad Gita, a sacred Sanskrit scripture of Hinduism. Of the three paths to realization, karma yoga is the process of achieving perfection in selfless action. Karma Yoga is primarily the practise of selfless service to humanity whereby a spiritual seeker attempts to give their actions selflessly without hoping for merit, fame or glory. This tendency for a human being to have attachment to 'reward' from action is termed in the Bhagavada Gita: the 'fruits of action' - meaning whatever one might gain from action, especially from the observation and applause of others.

Practising Karma Yoga eventually takes the seeker to the point of mental purification, oneness with humanity and inner peace by continually offering action selflessly to God and humanity. Ultimately Karma Yoga practise brings true Knowledge of the Self and prepares one to be receptive to the divine light of God.[2]

The Bhagavad Gita gives a summary of the karma yoga process.[3] The Gita itself is a chapter from the epic known as Mahabharata, wherein a dialogue takes place between the prince Arjuna, and his friend and chariot driver, Lord Krishna, on the brink of a great dynastic war. Their conversation is prompted by Arjuna as he is engulfed by sorrow and misgivings regarding the oncoming battle in which he has friends and relatives on both sides. In reply, Krishna then elucidates upon a number of philosophical yoga systems and practices (including karma yoga) by/through which Arjuna should indeed continue with the fight on righteous principles.

Karma yoga is described as a way of acting, thinking and willing by which one orients oneself towards realization by acting in accordance with one's duty (dharma) without consideration of personal self-centered desires, likes or dislikes. One acts without being attached to the results of one's deeds.[4]

Simply put, one does not get emotionally involved in the action being performed, becoming overly excited, upset or angry when the result of a deed is not as expected. The result may be negative or positive. Geeta also talks about "Meta"-Karma Yoga. I.e. not getting irritated, annoyed or unhappy when one gets attached to the result even after trying to practice Karma Yoga.

Krishna explains that work done without selfish expectations purifies one's mind and gradually makes an individual fit to see the value of reason. He states that it is not necessary to remain in external solitude, or remain actionless, in order to practice a spiritual life, since the state of action or inaction is primarily determined in the mind.[5]

Quotations from the Gita

In the Bhagavad Gita, Krishna says:

Therefore, without being attached to the results of activities, one should act as a matter of duty, for by working without attachment one attains the Supreme.[6]

Krishna then goes on to describe how Arjuna should surrender the results of his actions (good or bad) to him, Krishna, (as the Supreme Person or avatar) :

Therefore, O Arjuna, surrendering all your works unto Me, with full knowledge of Me, without desires for profit, with no claims to proprietorship, and free from lethargy, fight.[7]

Another important quotations from the Bhagavad Gita which elucidates karma yoga is "योगः कर्मसु कौशलं॥" (yoga is skill in karma.).

Any conscious action is motivated by some expectation about the outcome, yet one is to be careful to not let this expectation be selfish in a certain sense. This is accomplished by surrendering ownership of action to Krishna. This surrender is called sattvika tyaga (to contrast it with tamasika tyaga or abandoning action itself as Arjuna was about to).

The Shrivaishnava tradition formalizes this by recommending the chanting of a shloka prior (also called Sattvika tyaga) to the performance of any such significant karma. This shloka (using ITRANS), with its meaning is given below:

sva-ArAdhana-eka-prayojanAya idam <name of the karma>

The auspicious deity, exerting control on himself, using me (his other part) as an instrument, himself effects <name of the karma>, with his pleasure/ worship being the only purpose.

The same shloka may be repeated after the performance of the action, except one replaces karayati to karayitavAn to indicate past tense.

The common refrain "सर्वं श्री-कॄष्णार्पणमस्तु॥" is used for the same effect. There is also the following shloka:

Whatever I perform with my body, speech, mind, limbs, intellect or my inner self, either intentionally or unintentionally, I dedicate it to that Supreme Lord Narayana.

As with a number of other philosophies in Hinduism, karma yoga is based on a general understanding of karma and reincarnation (sanskara). It is believed that a man is born with certain tendencies (Sanskaras), both positive and negative, from his previous lives, which push him toward performing certain actions in his present one. This process continues until the individual attains a zero balance (no karma remaining), where in one achieves liberation. This liberation is called Moksha which is achieved if the Hindu breaks the cycle of Samsara (A cycle of constant death and rebirth). It can be achieved through Jnana Yoga (unity with Brahman).

Another meaning of Karma as per Shrimad Bhagawad Gita is the action prescribed by Bhagwan Shri Krishna. All human beings have Aatma (soul) inside their heart. This Aatma is part of the Paramaatma (The Complete Supreme Reality or Divinity). The goal of the Human being is to unite the Aatma (soul) with the Paramaatma (The Complete Supreme Reality or Divinity). The association of Aatma with Paramaatma,not unification, happens inside one's heart that is one experiences, understands the true nature of Paramaatma and become associated with it inside one's heart and later in true Vikunta. Bhagwan Shri Krishna prescribes a certain process of worship and meditation (to be done inside the mind) for unification of Aatma (soul) and Paramaatma (The Complete Supreme Reality or Divinity). This process is called as Yagya. Performing the Yagya as prescribed by Bhagwan Shri Krishna in Bhagwad Geeta is the real Karma. Sankirtana Yajna is prescribed for this Age in all authorised Scriptures and distributed by an incarnation of Lord KRISHNA as Lord Chithanya MahaPrabhu as explained in Srimad Bhagavatam and other real Vyasa's Scriptures, Any action other than Yagya are the worldly compulsions and not the Ordained Action indicated by Bhagwan Shri Krishna in the Bhagwad Geeta. The Karma is done to attain liberation (Moksha) from the cycle of the death and birth and free oneself from the great fear of being old and death.

Truth exists in the past, present and future. False never exists. Only Aatma (inner self or consciousness) is truth w.r.t consciousness. It is also Sanatan (eternal). Every human being need to know this Sanatan. It is duty (Dharm)of each human being to know this Sanatan. This is also called as Moksh (to realize the true nature of Aatma which is Paramaatma). Moksh frees Aatma from cycle of being born in various life forms (Each life form has to go through a cycle of birth - old age - death). Refer to Shrimad Bhagwad Geeta Chapter 2-40, 2-41, 4-27, 18-46 to 18-47. The true Karma is to implement the process of Yagnya.