Helena /ˈhɛlᵻnə/ is the capital city of the U.S. state of Montana and the county seat of Lewis and Clark County.[4] It was founded as a gold camp during the Montana gold rush, and was established in 1864. Over $3.6 billion of gold was extracted in the city limits over a duration of two decades, making it one of the wealthiest cities in America in the mid-nineteenth century. The concentration of wealth contributed to the city's prominent, elaborate Victorian architecture.

The Helena area was long used by various indigenous peoples. Evidence from the McHaffie and Indian Creek sites on opposite sides of the Elkhorn Mountains southeast of the Helena Valley show that people of the Folsom culture lived in the area more than 10,000 years ago.[8] Before the introduction of the horse some 300 years ago, and since, other native peoples, including the Salish and the Blackfeet, utilized the area seasonally on their nomadic rounds.[9] 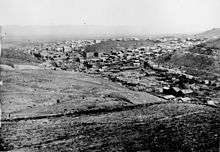 By the early 1800s people of European descent from the United States and British Canada began arriving to work the streams of the Missouri River watershed looking for fur-bearing animals like the beaver, undoubtedly bringing them through the area now known as the Helena Valley. Yet like the native peoples none of them stayed for long.[10]

Gold strikes in Idaho Territory in the early 1860s attracted many migrants who initiated major gold rushes at Grasshopper Creek (Bannack) and Alder Gulch (Virginia City) in 1862 and 1863 respectively. So many people came that the federal government created a new territory called Montana in May 1864. These miners prospected far and wide for new placer gold discoveries. On July 14, 1864, the discovery of gold by a prospecting party referred to as the "Four Georgians", in a gulch off the Prickly Pear Creek led to the founding of a mining camp along a small creek in the area they called Last Chance Gulch.[11]

The original camp was named "Last Chance" by the Four Georgians. By fall, the population had grown to over 200, and some thought the name "Last Chance" was too crass. On October 30, 1864, a group of at least seven self-appointed men met to name the town, authorize the layout of the streets, and elect commissioners. The first suggestion was "Tomah," a word the committee thought had connections to the local Indian people. Other nominations included Pumpkinville and Squashtown (as the meeting was held the day before Halloween). Other suggestions were to name the community after various Minnesota towns, such as Winona and Rochester, as a number of settlers had come from Minnesota. Finally, a Scotsman named John Summerville proposed Helena, which he pronounced /həˈliːnə/ hə-LEE-nə in honor of Helena Township, Scott County, Minnesota. This immediately caused an uproar from the former Confederates in the room, who insisted upon the pronunciation /ˈhɛlᵻnə/ HEL-i-nə, after Helena, Arkansas, a town on the Mississippi River. While the name "Helena" won, the pronunciation varied until approximately 1882 when the /ˈhɛlᵻnə/ HEL-i-nə pronunciation became dominant and has remained so to the present. Later tales of the naming of Helena claimed the name came variously from the island of St. Helena, where Napoleon had been exiled, or was that of a miner's sweetheart.[12]

The townsite was first surveyed in 1865 by Captain John Wood. However, many of the original streets followed the chaotic paths of the miners, going around claims and following the winding gulch. As a result, few city blocks are consistent in size; rather they have an irregular variety of shapes and sizes. 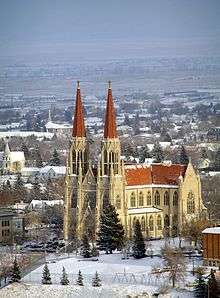 By 1888, about 50 millionaires lived in Helena, more per capita than in any city in the world. They had made their fortunes from gold. About $3.6 billion (in today's dollars) of gold was taken from Last Chance Gulch over a 20-year period. The Last Chance Placer is one of the most famous placer deposits in the western United States. Most of the production occurred before 1868. Much of the placer is now under the streets and buildings of Helena. (As late as the 1970s, when repairs were being made to a bank, a vein of placer gold was found under the bank's foundation).

This large concentration of wealth was the basis of developing fine residences and ambitious architecture in the city; its Victorian neighborhoods reflect the gold years. The numerous miners also attracted the development of a thriving red light district. Among the well-known local madams was Josephine "Chicago Joe" Airey, who built a thriving business empire between 1874 and 1893, becoming one of the largest and most influential landowners in Helena. The brothels of Helena were a successful part of the local business community well into the 20th century, ending with the 1973 death of Helena's last madam, "Big Dorothy" Baker.

The official symbol of Helena is a drawing of "The Guardian of the Gulch", a wooden fire watch tower built in 1886. It still stands on "Tower Hill" overlooking the historic downtown district. This fire tower replaced a series of observation buildings, the original being a flimsy lookout stand built in 1870 on the same site, built in response to a series of devastating fires: April 1869, November 1869, October 1871, August 1872 and January 1874 that swept through the early mining camp. 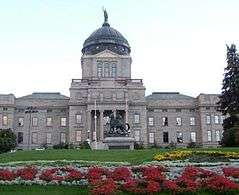 In 1889, railroad magnate Charles Arthur Broadwater opened his Hotel Broadwater and Natatorium west of Helena. The Natatorium was home to the world's first indoor swimming pool. Damaged in the earthquake of 1935, it was closed in 1941. The many buildings on the property were demolished in 1976. Today, the Broadwater Fitness Center stands just west of the Hotel & Natatorium's original location, complete with an outdoor pool heated by natural spring water running underneath it.

Helena has been the capital of Montana Territory since 1875 and the state of Montana since 1889. In 1902, the Montana State Capitol was completed. A large portion of the conflict between Marcus Daly and William Andrews Clark (the Copper Kings) was over the location of the state capital. Until the 1900 census, Helena was the most populated city in the state. That year it was surpassed by Butte, where mining industry was developing.

The Cathedral of Saint Helena and the Helena Civic Center are two of many significant historic buildings in Helena.

Numerous Helenans work for various agencies of the state government. When in Helena, most people visit the local walking mall. It was completed in the early 1980s after Urban Renewal and the Model Cities Program in the early 1970s had removed many historic buildings from the downtown district. During the next decade, a three-block long shopping district was renovated that followed the original Last Chance Gulch. A small artificial stream runs along most of the walking mall, to represent the underground springs that originally flowed above ground in parts of the Gulch.

With the mountains, Helena is the location for much outdoor recreation, including hunting and fishing. It has a local ski area, Great Divide Ski Area, northwest of town near the ghost town of Marysville. Helena is also known for its mountain biking. It was officially designated as an International Mountain Bicycling Association bronze level Ride Center on October 23, 2013. 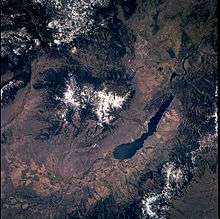 Helena has a semi-arid climate (Köppen BSk), with long, cold and moderately snowy winters, hot and dry summers, and short springs and autumns in between. The monthly daily average temperature ranges from 21.8 °F (−5.7 °C) in December to 70.0 °F (21.1 °C) in July,[15] with average diurnal temperature variation exceeding 30 °F (17 °C) in summer, due to the aridity and elevation. Snowfall has been observed in every month of the year,[15] but is usually absent from May to September, and normally accumulates in only light amounts. Winters have periods of moderation, partly due to warming influence from chinooks. Precipitation mostly falls in the spring and is generally sparse, averaging only 11.3 inches (287 mm) annually.

There were 12,780 households of which 24.3% had children under the age of 18 living with them, 38.2% were married couples living together, 10.6% had a female householder with no husband present, 3.6% had a male householder with no wife present, and 47.6% were non-families. 39.8% of all households were made up of individuals and 13.5% had someone living alone who was 65 years of age or older. The average household size was 2.07 and the average family size was 2.77.

Helena has a long record of economic stability with its history as being the state capital and being founded in an area rich in silver and lead deposits. Its status as capital makes it a major hub of activity at the county, state, and federal level. Thirty-one percent of the city's workforce is made up of government positions with private sector jobs comprising 62 percent.[21] According to the Helena Area Chamber of Commerce, the capital's median household income is $50,889, and its unemployment rate stood at 3.8% in 2013, about 1.2% lower than the rest of the state.[22] Education is a major employer, with two high schools and accompanying elementary and middle schools for K-12 students as well as Helena College. Major private employers within the city of Helena include Carroll College and the medical community.

Helena’s economy is also bolstered by Fort William Henry Harrison, the training facility for the Montana National Guard, located just outside the city.[23] Fort Harrison is also home to Fort Harrison VA Medical Center, where many Helena-area residents work.[24] Within Lewis and Clark County, there also remains one mineral processing plant and several light manufacturing facilities, including a division of Boeing.

Helena's Designated Market Area is 205th in size, as defined by Nielsen Media Research, and is the fifth smallest media market in the nation.