This article is about the Japanese city. For the list of kigo, see Saijiki. 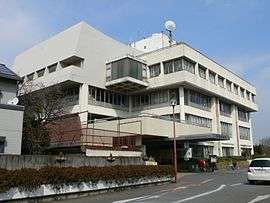 Kiyose City is roughly in the shape of a wedge bordered by Saitama Prefecture to the north, east and south.The city has a lot of green tracts, with around 46% of its area remaining rural.

Kiyose is located on a tableland about 15 km from the northeastern edge of Musashino Plateau. The area measures 6.5 km northeast to southwest and 2 km northwest to southeast, with the west side slightly higher than the east. Average altitude above sea level ranges from 65m at Takeoka in the west to 20m at Shitajuku in the northeastern side. The city area is mostly diluvial soil except for a small area of alluvial soil by Yanase River, which runs on the edge of the region. Loamy and conglomerate layers are piled up around a housing estate near the river.

Archaeologists have found evidence of human settlement in the Kiyose area dating from over 20 thousand years ago, during the last glacial maximum. During the Muromachi period, the area came under the control of Oishi Nobushige from Saku, Shinano (now Nagano Prefecture). The Oishi clan constructed a castle named Takinojo but it was lost during battles with Toyotomi Hideyoshi.

The modern village of Kiyose was created within Kitatama District, Kanagawa by the merger of the hamlets of Kamikiyoto, Nakakiyoto, Shimokiyoto, Kiyotoshitajuku, Noshio and Nakazato with the establishment of the municipalities system on April 1, 1889. In 1893, Kitatama was transferred from Kanagawa to Tokyo. In 1954, Kiyose was elevated to town status. On October 1, 1970 Kiyose was elevated to city status.

Kiyose was noted for many sanatoria for tuberculosis patients. Whilst the incidence of the disease has greatly decreased, the city still has the second most hospital beds after Chiyoda Ward.

Kiyose is largely a bedroom community, with over a third of its workforce commuting to central Tokyo every day. However, approximately 40% of the city’s land area remains classified as agricultural, with spinach and carrots as the main crops.

Kiyose is not served by any national highways