The station has two elevated island platforms serving four tracks, with additional passing tracks on either side of the Sōbu Line (Rapid) tracks for non-stop (limited express and commuter rapid) services.

The station has a "Midori no Madoguchi" staffed ticket office and a View Plaza travel agency. The "Shapo" shopping building adjoins the station. 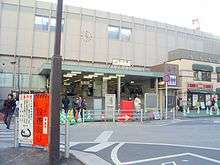 The north entrance in March 2007, before addition of an overhanging roof

In fiscal 2013, the station was used by an average of 59,153 passengers daily (boarding passengers only), making it the 75th-busiest station operated by JR East.[2] The passenger figures for previous years are as shown below. 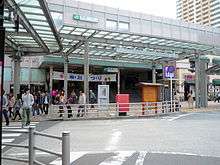 Bus stops are located on the north and south sides of the station, served by Keisei Bus. As of January 2015, the following bus services are available from Ichikawa Station.[8]