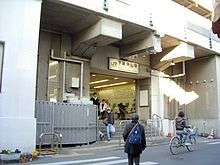 The station consists of an elevated island platform serving two tracks. The station has a Midori no Madoguchi staffed ticket office.[1]

The passenger figures (boarding passengers only) for previous years are as shown below.

The station has courtesy umbrellas near the station gate.