The station consists of three island platforms serving six tracks,[1] with the station building located above and perpendicular to the platforms. The station has a "Midori no Madoguchi" staffed ticket office. 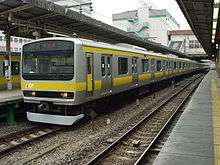