Nakano Station (中野駅, Nakano-eki) is a railway station on the Chūō Main Line in Nakano, Tokyo in Japan.

Nakano Station is served by the JR East Chūō Line (Rapid) and Chūō-Sōbu Line, and the Tokyo Metro Tōzai Line. There are no turnstiles between lines, allowing for easy transfers. 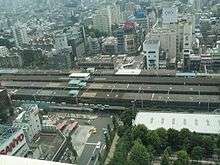 Nakano Station viewed from above, June 2003

The daily passenger figures for each operator in previous years are as shown below.

This article is issued from Wikipedia - version of the 11/20/2015. The text is available under the Creative Commons Attribution/Share Alike but additional terms may apply for the media files.