The JR East part of the station consists of two island platforms serving four tracks. The station has a "Midori no Madoguchi" staffed ticket counter and "View Plaza" travel agency.[2] 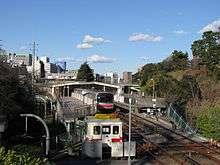 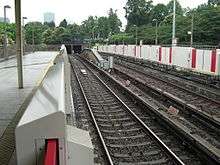 Yotsuya Station opened on 9 September 1894[2] as a station on the Kobu Railway, the forerunner of the Chūō Line which was nationalized in 1906. Although the line was originally single-track, the section passing through Yotsuya was double-tracked in 1895 and quadruple-tracked in 1929.

The station is situated in the Yotsuya neighborhood on the boundary between Shinjuku and Chiyoda wards.