Nishi-Ogikubo Station is served by the Chūō Line (Rapid) and Chūō-Sōbu Line. 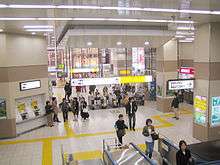 The station has a "Midori no Madoguchi" staffed ticket office.[1]

The neighbourhoods surrounding the station are characterised by narrow streets. It is primarily a residential area, with a high concentration of shops specialising in antiques and old books.

This article is issued from Wikipedia - version of the 12/22/2015. The text is available under the Creative Commons Attribution/Share Alike but additional terms may apply for the media files.