Kichijōji Station is located on the JR East Chūō Main Line, and is served by all-stations Chūō-Sōbu Line services from Chiba and some Chūō Line (Rapid) limited-stop services from Tokyo. It also forms a terminus of the Keio Inokashira Line and is located 12.7 kilometers from the opposing terminus at Shibuya in Tokyo.[1] The station is 14 minutes from Shinjuku and 28 minutes from Tokyo by Chuo Line rapid service, and 23 minutes from Shibuya by Inokashira Line express service.[2]

From 22 February 2013, station numbering was introduced on Keio lines, with Kichijōji Station becoming "IN17".[5] 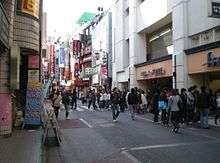 The south entrance to the station in March 2008