The Toei Asakusa Line (都営地下鉄浅草線, Toei Chikatetsu Asakusa-sen) is a subway line in Tokyo, Japan, operated by the Tokyo subway operator Toei Subway. The line runs between Nishi-Magome in Ōta and Oshiage in Sumida. The Asakusa Line was the first subway line in Japan to offer through services with a private railway. Today, it has more through services to other lines than any other subway line in Tokyo. Keikyu operates through trains on the Keikyu Main Line to Misakiguchi and the Keikyu Airport Line to Haneda Airport. The Keisei Electric Railway operates through trains on the Keisei Oshiage Line to Inba-Nihon-Idai and the Keisei Main Line to Narita Airport, and the Shibayama Railway runs trains via the Keisei Main Line and the Shibayama Railway Line to Shibayama-Chiyoda.

The Asakusa Line is actually split in two sub-lines, (Narita -) Oshiage - Sengakuji (- Haneda) and Sengakuji - Nishi-Magome, only 25% of the trains make all station stops on the Asakusa Line.

On maps and signboards, the line is shown in "rose" (O). Stations carry the letter "A" followed by a two-digit number.

The Toei Asakusa Line was the first subway line constructed by the Tokyo Metropolitan Government. The line number is Line 1, because it was technically the first subway line in Tokyo to be planned in the 1920s as an underground route connecting the Keikyu and Keisei Electric Railway via Shinagawa, eventually allowing for through trains between these two railways. In its original plan form, the line would have actually bypassed Asakusa Station entirely. However, the plan was changed to take advantage of the existing Tōbu Isesaki Line and Tokyo Metro Ginza Line connections at Asakusa.

Construction of this line began on August 27, 1956 after years of delays, and the initial 3.2 km segment between Oshiage and Asakusabashi opened on December 4, 1960. The line then opened in stages from north to south:

From 1998 to 2002, the Asakusa Line was used as part of a rail connection between Tokyo's two major airports, Haneda and Narita. While a few trains still run between the airports (see below), the service has greatly diminished in frequency since 2002.

In 2005, a research group of government, metropolitan and railway company officials proposed that the Asakusa Line be connected to Tokyo Station via a spur to the north of Takarachō Station. This would provide Tokyo Station's first direct connection to the Toei subway network. It would also make it possible to reach Haneda Airport in 25 minutes (versus 35 minutes today) and Narita Airport in 40 minutes (versus 57 minutes today).[2] This plan has yet to be finalized or formally adopted.

1The Tsukuba Express station is located 600 metres (2,000 ft) to the west of this station. 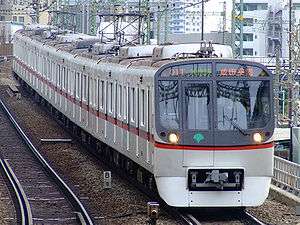 A variety of rolling stock is in use due to the large number of through service operators on the line. 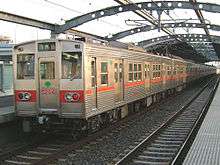