A natural experiment is an empirical study in which individuals (or clusters of individuals) exposed to the experimental and control conditions are determined by nature or by other factors outside the control of the investigators, but the process governing the exposures arguably resembles random assignment. Thus, natural experiments are observational studies and are not controlled in the traditional sense of a randomized experiment. Natural experiments are most useful when there has been a clearly defined exposure involving a well defined subpopulation (and the absence of exposure in a similar subpopulation) such that changes in outcomes may be plausibly attributed to the exposure.[1][2] In this sense, the difference between a natural experiment and a non-experimental observational study is that the former includes a comparison of conditions that pave the way for causal inference, but the latter does not.

Natural experiments are employed as study designs when controlled experimentation is extremely difficult to implement or unethical, such as in several research areas addressed by epidemiology (like evaluating the health impact of varying degrees of exposure to ionizing radiation in people living near Hiroshima at the time of the atomic blast[3]) and economics (like estimating the economic return on amount of schooling in US adults[4]).[1][2] 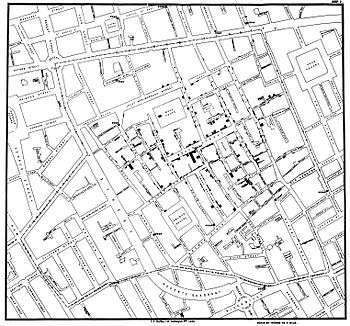 One of the most famous early natural experiments was the 1854 Broad Street cholera outbreak in London, England.

On 31 August 1854, a major outbreak of cholera struck Soho. Over the next three days 127 people near Broad Street died. By the end of the outbreak 616 people died. The physician John Snow identified the source of the outbreak as the nearest public water pump, using a map of deaths and illness that revealed a cluster of cases around the pump.

In this example, Snow discovered a strong association between the use of the water and deaths and illnesses due to cholera. Snow found that the Southwark and Vauxhall Waterworks Company, which supplied water to districts with high attack rates, obtained the water from the Thames downstream from where raw sewage was discharged into the river. By contrast, districts that were supplied water by the Lambeth Waterworks Company, which obtained water upstream from the points of sewage discharge, had low attack rates. Given the near-haphazard patchwork development of the water supply in mid-Nineteenth Century London, Snow viewed the developments as "an experiment...on the grandest scale."[5] Of course, the exposure to the polluted water was not under the control of any scientist. Therefore, this exposure has been recognized as being a natural experiment.[6][7][8]

Within economics, game shows are a frequently studied form of natural experiment. While game shows might seem to be artificial contexts, they can be considered natural experiments due to the fact that the context arises without interference of the scientist. Game shows have been used to study a wide range of different types of economic behavior, such as decision making under risk[10] and cooperative behavior.[11]

An example of a natural experiment occurred in Helena, Montana during the six-month period from June 2002 to December 2002 when a smoking ban was in effect in all public spaces in Helena including bars and restaurants. Helena is geographically isolated and served by only one hospital. It was observed that the rate of heart attacks dropped by 40% while the smoking ban was in effect. Opponents of the law prevailed in getting the enforcement of the law suspended after six months, after which the rate of heart attacks went back up.[12] This was a good example of a natural experiment (called a case-crossover experiment, where the exposure is removed for a time and then returned), but also an example of how confounding variables in a natural experiment can lead to false conclusions. Heart-attack rates were already on the decline before the smoking ban, and the population size was small enough (a reduction of 16 heart attacks from 40 in the period before the ban) that the large-percentage fluctuation was likely due to chance. The Helena study's conclusion that 40% of pre-ban heart attacks were caused by passive smoking is actually implausible, since only 10–15% of coronary heart-disease cases are thought to be caused by active smoking.[13]

Nuclear weapons testing released large quantities of radioactive isotopes into the atmosphere, some of which could be incorporated into biological tissues. The release stopped after the Partial Nuclear Test Ban Treaty in 1963, which prohibited atmospheric nuclear tests. This resembled a large-scale pulse-chase experiment, but could not have been performed as a regular experiment in humans due to scientific ethics. Several types of observations were made possible (in people born before 1963), such as determination of the rate of replacement for cells in different human tissues.

An important question in economics research is what determines earnings. Angrist (1990) evaluated the effects of military service on lifetime earnings.[14] Using statistical methods developed in econometrics,[15] Angrist capitalized on the approximate random assignment of the Vietnam War draft lottery, and used it as an instrumental variable associated with eligibiity (or non-eligibility) for military service. Because many factors might predict whether someone serves in the military, the draft lottery frames a natural experiment whereby those drafted into the military can be compared against those not drafted because the two groups should not differ substantially prior to military service. Angrist found that the earnings of veterans were, on average, about 15 percent less than the earnings of non-veterans.