A monotonic likelihood ratio in distributions 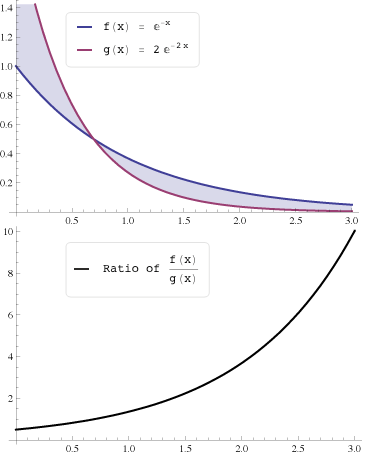 In statistics, the monotone likelihood ratio property is a property of the ratio of two probability density functions (PDFs). Formally, distributions ƒ(x) and g(x) bear the property if

that is, if the ratio is nondecreasing in the argument

If the functions are first-differentiable, the property may sometimes be stated

The MLRP is used to represent a data-generating process that enjoys a straightforward relationship between the magnitude of some observed variable and the distribution it draws from. If

satisfies the MLRP with respect to

, the higher the observed value

, the more likely it was drawn from distribution

. As usual for monotonic relationships, the likelihood ratio's monotonicity comes in handy in statistics, particularly when using maximum-likelihood estimation. Also, distribution families with MLR have a number of well-behaved stochastic properties, such as first-order stochastic dominance and increasing hazard ratios. Unfortunately, as is also usual, the strength of this assumption comes at the price of realism. Many processes in the world do not exhibit a monotonic correspondence between input and output.

Example: Working hard or slacking off

Suppose you are working on a project, and you can either work hard or slack off. Call your choice of effort

and the quality of the resulting project

. If the MLRP holds for the distribution of q conditional on your effort

which, thanks to the MLRP, is monotonically increasing in

. Hence if some employer is doing a "performance review" he can infer his employee's behavior from the merits of his work.

Statistical models often assume that data are generated by a distribution from some family of distributions and seek to determine that distribution. This task is simplified if the family has the Monotone Likelihood Ratio Property (MLRP).

A family of density functions

indexed by a parameter

taking values in an ordered set

is a non-decreasing function of

Then we say the family of distributions "has MLR in

If the family of random variables has the MLRP in

, a uniformly most powerful test can easily be determined for the hypotheses

be an input into a stochastic technology --- worker's effort, for instance --- and

its output, the likelihood of which is described by a probability density function

Then the monotone likelihood ratio property (MLRP) of the family

is expressed as follows: for any

implies that the ratio

Relation to other statistical properties

Monotone likelihoods are used in several areas of statistical theory, including point estimation and hypothesis testing, as well as in probability models.

has a monotone non-decreasing likelihood ratio in the sufficient statistic T(x), provided that

Most powerful tests: The Karlin–Rubin theorem

Monotone likelihood-functions are used to construct uniformly most powerful tests, according to the Karlin–Rubin theorem.[1] Consider a scalar measurement having a probability density function parameterized by a scalar parameter θ, and define the likelihood ratio

is monotone non-decreasing, in

(meaning that the greater

is, the more likely

is), then the threshold test:

is chosen such that

is the UMP test of size α for testing

Note that exactly the same test is also UMP for testing

If a family of distributions

has the monotone likelihood ratio property in

But not conversely: neither monotone hazard rates nor stochastic dominance imply the MLRP.

satisfy MLR in x, so that for

Integrating this expression twice, we obtain:

Combine the two inequalities above to get first-order dominance:

Use only the second inequality above to get a monotone hazard rate: