In signal processing, cross-correlation is a measure of similarity of two series as a function of the displacement of one relative to the other. This is also known as a sliding dot product or sliding inner-product. It is commonly used for searching a long signal for a shorter, known feature. It has applications in pattern recognition, single particle analysis, electron tomography, averaging, cryptanalysis, and neurophysiology.

For continuous functions f and g, the cross-correlation is defined as:

denotes the complex conjugate of

is the displacement, also known as lag, although a positive value of

Similarly, for discrete functions, the cross-correlation is defined as: 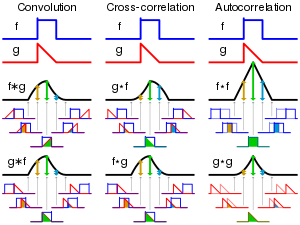 The cross-correlation is similar in nature to the convolution of two functions.

In an autocorrelation, which is the cross-correlation of a signal with itself, there will always be a peak at a lag of zero, and its size will be the signal power.

; however this terminology is not used in probability and statistics. In contrast, the convolution

differing only by an unknown shift along the x-axis. One can use the cross-correlation to find how much

. The formula essentially slides the

function along the x-axis, calculating the integral of their product at each position. When the functions match, the value of

, taking the conjugate of

ensures that aligned peaks (or aligned troughs) with imaginary components will contribute positively to the integral.

In econometrics, lagged cross-correlation is sometimes referred to as cross-autocorrelation.[6]

In time series analysis, as applied in statistics and signal processing, the cross-correlation between two time series describes the normalized cross-covariance function.

represent a pair of stochastic processes that are jointly wide-sense stationary. Then the cross-covariance and the cross-correlation are given by

are the mean and standard deviation of the process

, which are constant over time due to stationarity; and similarly for

indicates the expected value. That the cross-covariance and cross-correlation are independent of t is precisely the additional information (beyond being individually wide-sense stationary) conveyed by the requirement that

The cross-correlation of a pair of jointly wide sense stationary stochastic processes can be estimated by averaging the product of samples measured from one process and samples measured from the other (and its time shifts). The samples included in the average can be an arbitrary subset of all the samples in the signal (e.g., samples within a finite time window or a sub-sampling of one of the signals). For a large number of samples, the average converges to the true cross-correlation.

For image-processing applications in which the brightness of the image and template can vary due to lighting and exposure conditions, the images can be first normalized. This is typically done at every step by subtracting the mean and dividing by the standard deviation. That is, the cross-correlation of a template,

is the number of pixels in

is the average of f and

is standard deviation of f. In functional analysis terms, this can be thought of as the dot product of two normalized vectors. That is, if

then the above sum is equal to

is the inner product and

is the L² norm. Thus, if f and t are real matrices, their normalized cross-correlation equals the cosine of the angle between the unit vectors F and T, being thus 1 if and only if F equals T multiplied by a positive scalar.

Normalized correlation is one of the methods used for template matching, a process used for finding incidences of a pattern or object within an image. It is also the 2-dimensional version of Pearson product-moment correlation coefficient.

Caution must be applied when using cross correlation for nonlinear systems. In certain circumstances, which depend on the properties of the input, cross correlation between the input and output of a system with nonlinear dynamics can be completely blind to certain nonlinear effects.[10] This problem arises because some quadratic moments can equal zero and this can incorrectly suggest that there is little "correlation" (in the sense of statistical dependence) between two signals, when in fact the two signals are strongly related by nonlinear dynamics.