Not to be confused with Coefficient of partial determination.

In probability theory and statistics, partial correlation measures the degree of association between two random variables, with the effect of a set of controlling random variables removed.

A simple way to compute the sample partial correlation for some data is to solve the two associated linear regression problems, get the residuals, and calculate the correlation between the residuals. Let X and Y be, as above, random variables taking real values, and let Z be the n-dimensional vector-valued random variable. If we write xi, yi and zi to denote the ith of N i.i.d. samples of some joint probability distribution over real random variables X, Y and Z, solving the linear regression problem amounts to finding n-dimensional coefficient vectors

with N being the number of samples and

the scalar product between the vectors v and w. Note that in some formulations the regression includes a constant term, so the matrix

would have an additional column of ones.

The residuals are then

and the sample partial correlation is then given by the usual formula for sample correlation , but between these new derived values.

It holds, for any

Naïvely implementing this computation as a recursive algorithm yields an exponential time complexity. However, this computation has the overlapping subproblems property, such that using dynamic programming or simply caching the results of the recursive calls yields a complexity of

Note in the case where Z is a single variable, this reduces to:

time, another approach allows all partial correlations to be computed between any two variables Xi and Xj of a set V of cardinality n, given all others, i.e.,

, if the correlation matrix (or alternatively covariance matrix) Ω = (ωij), where ωij = ρXiXj, is positive definite and therefore invertible. If we define P = Ω−1, we have: 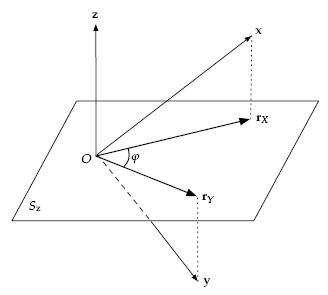 The same also applies to the residuals RY generating a vector rY. The desired partial correlation is then the cosine of the angle φ between the projections rX and rY of x and y, respectively, onto the hyperplane perpendicular to z.[2]:ch. 7

With the assumption that all involved variables are multivariate Gaussian, the partial correlation ρXY·Z is zero if and only if X is conditionally independent from Y given Z.[3] This property does not hold in the general case.

To test if a sample partial correlation

vanishes, Fisher's z-transform of the partial correlation can be used:

The null hypothesis is

, to be tested against the two-tail alternative

. We reject H0 with significance level α if:

The distribution of the sample partial correlation was described by Fisher.[5]

The semipartial (or part) correlation can be viewed as more practically relevant "because it is scaled to (i.e., relative to) the total variability in the dependent (response) variable." [7] Conversely, it is less theoretically useful because it is less precise about the role of the unique contribution of the independent variable.

Use in time series analysis

This function is used to determine the appropriate lag length for an autoregression.