Example star plot from NASA, with some of the most desirable design results represented in the center. 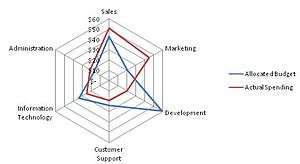 This spider chart represents the allocated budget versus actual spending for a given organization.

A radar chart is a graphical method of displaying multivariate data in the form of a two-dimensional chart of three or more quantitative variables represented on axes starting from the same point. The relative position and angle of the axes is typically uninformative.

The radar chart is a chart and/or plot that consists of a sequence of equi-angular spokes, called radii, with each spoke representing one of the variables. The data length of a spoke is proportional to the magnitude of the variable for the data point relative to the maximum magnitude of the variable across all data points. A line is drawn connecting the data values for each spoke. This gives the plot a star-like appearance and the origin of one of the popular names for this plot. The star plot can be used to answer the following questions:[4]

Radar charts are a useful way to display multivariate observations with an arbitrary number of variables.[5] Each star represents a single observation. Typically, radar charts are generated in a multi-plot format with many stars on each page and each star representing one observation.[4] The star plot was first used by Georg von Mayr in 1877.[6][7] Radar charts differ from glyph plots in that all variables are used to construct the plotted star figure. There is no separation into foreground and background variables. Instead, the star-shaped figures are usually arranged in a rectangular array on the page. It is somewhat easier to see patterns in the data if the observations are arranged in some non-arbitrary order (if the variables are assigned to the rays of the star in some meaningful order).[8]

One application of radar charts is the control of quality improvement to display the performance metrics of any ongoing program.[9]

They are also used in sports to chart players' strengths and weaknesses, where they are usually called spider charts.[10]

Radar charts are primarily suited for strikingly showing outliers and commonality, or when one chart is greater in every variable than another, and primarily used for ordinal measurements – where each variable corresponds to "better" in some respect, and all variables on the same scale.

Conversely, radar charts have been criticized as poorly suited for making trade-off decisions – when one chart is greater than another on some variables, but less on others.[11]

Further, it is hard to visually compare lengths of different spokes, because radial distances are hard to judge, though concentric circles help as grid lines. Instead, one may use a simple line graph, particularly for time series.[12]

In some cases there is a natural structure, and radar charts can be well-suited. For example, for diagrams of data that vary over a 24-hour cycle, the hourly data is naturally related to its neighbor, and has a cyclic structure, so it can naturally be displayed as a radar chart.[12][14][15]

One set of guidelines on the use of radar charts (or rather the closely related "polar area graph") is:[15]

Radar charts are helpful for small-to-moderate-sized multivariate data sets. Their primary weakness is that their effectiveness is limited to data sets with less than a few hundred points. After that, they tend to be overwhelming.[4]

Detail for the star plot of the Cadillac Seville.

The chart on the right[4] contains the star plots of 15 cars. The variable list for the sample star plot is:

We can look at these plots individually or we can use them to identify clusters of cars with similar features. For example, we can look at the star plot of the Cadillac Seville (the last one on the image) and see that it is one of the most expensive cars, gets below average (but not among the worst) gas mileage, has an average repair record, and has average-to-above-average roominess and size. We can then compare the Cadillac models (the last three plots) with the AMC models (the first three plots). This comparison shows distinct patterns. The AMC models tend to be inexpensive, have below average gas mileage, and are small in both height and weight and in roominess. The Cadillac models are expensive, have poor gas mileage, and are large in both size and roominess.[4]

Most simply, one may use a simple line graph, particularly for time series.[12]

For graphical qualitative comparison of 2-dimensional tabular data in several variables, a common alternative are Harvey Balls, which are used extensively by Consumer Reports.[16] Comparison in Harvey Balls (and radar charts) may be significantly aided by ordering the variables algorithmically to add order.[17]

An excellent way for visualising structures within multivariate data is offered by principal component analysis (PCA).

Another alternative is to use small, inline bar charts, which may be compared to sparklines.[17]

Although radar and polar charts are often described as the same chart types,[3] some sources make a difference between them and even consider the radar chart to be a polar chart's variation that does not display data in terms of polar coordinate.[18]

This article incorporates public domain material from the National Institute of Standards and Technology website http://www.nist.gov.