Probabilistic design is a discipline within engineering design. It deals primarily with the consideration of the effects of random variability upon the performance of an engineering system during the design phase. Typically, these effects are related to quality and reliability. Thus, probabilistic design is a tool that is mostly used in areas that are concerned with quality and reliability. For example, product design, quality control, systems engineering, machine design, civil engineering (particularly useful in limit state design) and manufacturing. It differs from the classical approach to design by assuming a small probability of failure instead of using the safety factor. [1] [2] 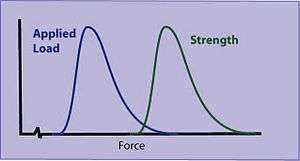 Example showing statistical interference of distributions of applied load and strength, resulting in some failures[3]

When using a probabilistic approach to design, the designer no longer thinks of each variable as a single value or number. Instead, each variable is viewed as a probability distribution. From this perspective, probabilistic design predicts the flow of variability (or distributions) through a system. By considering this flow, a designer can make adjustments to reduce the flow of random variability, and improve quality. Proponents of the approach contend that many quality problems can be predicted and rectified during the early design stages and at a much reduced cost.

The objective of probabilistic design

Typically, the goal of probabilistic design is to identify the design that will exhibit the smallest effects of random variability. This could be the one design option out of several that is found to be most robust. Alternatively, it could be the only design option available, but with the optimum combination of input variables and parameters. This second approach is sometimes referred to as robustification, parameter design or design for six sigma

This article is issued from Wikipedia - version of the 2/18/2015. The text is available under the Creative Commons Attribution/Share Alike but additional terms may apply for the media files.