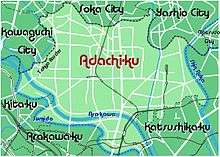 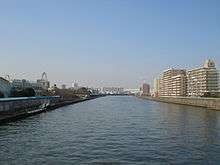 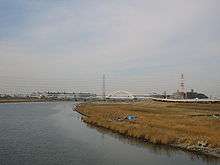 Adachi (足立区, Adachi-ku) is a special ward located in Tokyo Metropolis, Japan. It is located north of the heart of Tokyo. The ward consists of two separate areas: a small strip of land between the Sumida River and Arakawa River and a larger area north of the Arakawa River. The ward is bordered by the cities of Kawaguchi, Sōka and Yashio in Saitama and Katsushika, Sumida, Arakawa, and Kita in Tokyo. The ward is called Adachi City in English.

Under the Ritsuryō system, the present-day ward was the southern extremity of Adachi District, Musashi Province. In 826, during the Heian period, the Nishiarai Daishi temple was founded. During the Muromachi period and into the Sengoku period, the Chiba clan held control of the region. The Great Senju Bridge was built in 1594. In the Edo period, parts were under the direct control of the Tokugawa shogunate, and parts were under the administration of Kan'ei-ji, a temple in present-day Ueno, Tokyo. Adachi was also home to Senju-shuku was a post station on both the Nikkō Kaidō and the Mito Kaidō. The shogunate maintained the Kozukappara execution grounds in Senju.

In 1932, Adachi, formerly known as Minamiadachi District, became a ward of Tokyo City. The special ward was founded on March 15, 1947.

Nishiarai Daishi, located in Nishiarai, is a temple of the Buzan branch of Shingon Buddhism. Its formal name is Gochisan Henjōin Sōji-ji (Sōji-ji Temple). This is one of the Three Great Temples in the Kantō region along with Kawasaki Daishi and Sano Yakuyoke Daishi, and a large number of people annually visit the temple at New Year.

Toneri Park is a metropolitan park located in Toneri. It is divided into east and west sections by Ogubashi Street. The west site has sports facilities such as an athletic stadium, tennis courts and baseball grounds. The east site has a big pond, water park and bird sanctuary. A part of the east site is now under construction. The park can be accessed by arriving at Toneri-kōen Station on the Nippori-Toneri Liner or by bus.

Higashi Ayase Park is a metropolitan park that straddles the border between Ayase and Higashi Ayase. It contains Tokyo Budokan. Within the park, there is a Japanese garden which has a wide variety of plants. It also has sports facilities such as baseball and gateball grounds.

Urban Agricultural Park (Toshi Nōgyō Kōen), located in Shikahama, is run by Adachi Ward. Officially, it is a part of Kōhoku Park. It is located near the meeting of the Shiba and Arakawa Rivers, and its south end faces a green space on the Arakawa river area. There are fields, orchards, greenhouses and other facilities that aim to show farming techniques that have been adopted in the suburbs of Tokyo. There are also facilities for families such as lawns and play equipment.

There is a rest house near the entrance on the Arakawa riverbank side. The rest house is at the point where the Arakawa and Shibakawa cycling roads meet. There is no admission fee. It is closed early in the morning and late at night, as well as all day on some days such as the year-end and new-year holidays. The park is far from the train station, but there is a bus running from Nishiarai Station to the park. The park is about a five-minute walk south of the bus stop Shikahama 5 on Kawaguchi Station line (Shikahama-Ryōke) and Akabane Station line (to Nishiarai Station by way of Arakawa Bridge). There is parking for cars and sightseeing buses under the Shuto Expressway Kawaguchi Route, and Shikahamabashi Exit and Higashi Ryōke Exit are nearby. The parking lot is also close to Kan-nana Road.

Adachi Park of Living Things, located within Motofuchie Park in Hokima, is run by Adachi Ward.

Tokyo Budokan, located within Higashi Ayase Metropolitan Park, is a sports facility run by Tokyo Sport Benefits Corporation. The Tokyo Budokan has an avant-garde building designed by a famous architect Kijō Rokkaku. It includes places for martial arts and Kyūdō, and training rooms. The word budokan means "martial arts hall," and the same word is part of the name of the more-famous Nippon Budokan. The Tokyo Budokan's address is 3-20-1 Ayase, Adachi, Tokyo.

Galaxy+City (Gyarakushitii) is a generic term for series of cultural facilities in Kurihara. It used to be run by Adachi Lifelong Educational Promotion Corporation, but the management was taken over by Youth Centre of Adachi Board of Education on 1 April 2005. It contains two main facilities: Nishiarai Culture Hall (theatre) and Adachi Children’s Science Museum. There are also event halls, cafes and others.

Theatre 1010 was named as it is because the number 1010 (Senjū) and the name of the theatre’s location (Senju) are homonyms in Japanese.

Tokyo Future University is located in the area.

The primary railway station in the city is Kita-Senju Station.