The Danish Realm (Danish: Det Danske Rige[14]) is an official term[14][15] for the constitutional relationship between Denmark proper and the two overseas constituent countries, the Faroe Islands and Greenland, which collectively constitute the Kingdom of Denmark. The concept is also known as the Unity of the Realm[16] (Danish: rigsenheden), or less formally as "the Commonwealth of the Realm"[13] (Danish: rigsfællesskabet; Faroese: ríkisfelagsskapurin; Greenlandic: naalagaaffeqatigiit).

The nature of the Kingdom of Denmark is fundamentally one of a unitary sovereign state. The Faroe Islands and Greenland have been part of the Kingdom of Denmark since 1397 when the Kalmar Union was ratified. However, due to their separate historical and cultural identities, these parts of the Realm now have an extensive type of self-government and have assumed legislative and administrative responsibility in a substantial number of fields.[17]

The Danish Constitution stipulates that the foreign and security interests for all parts of the Kingdom of Denmark are the responsibility of the Danish government. The Faroes received home rule in 1948 and Greenland did so in 1979. In 2005, the Faroes received a self-government arrangement, and in 2009 Greenland received "self rule", thus leaving the Danish government with virtually no influence over Greenlandic internal affairs.

The Kingdom of Denmark's unique state of internal affairs is acted out in the principle of the "unity of the Realm".[14] This principle is derived from Article 1 of the Danish Constitution, which specifies that constitutional law applies equally to all areas of the Danish Realm.[18] The Constitutional Act specifies that sovereignty is to continue to be exclusively with the authorities of the Realm (the Danish government and parliament). Faroese or Greenlandic self-governance cannot be established by international treaties but must be established by Danish law; the Danish parliament (the Folketing) delegates a precisely defined part of its competence to the home rule authorities.[19]

The language of Denmark is Danish, and the Danish state authorities are based in Denmark. The Kingdom of Denmark's parliament, with its 179 members, is located in the capital, Copenhagen. Two of the parliament's members are elected in each of Greenland and the Faroe Islands; the remaining 175 members are elected in Denmark. The Government ministries are located in Copenhagen, as is the highest court, the Supreme Court.[18]

In principle, the Danish Realm constitutes a unified sovereign state, with equal status between its constituent parts.[13] Devolution differs from federalism in that the devolved powers of the subnational authority ultimately reside in central government, thus the state remains de jure unitary.

Tinganes, in the capital Tórshavn, is the location of the Faroese Home Government.

The 1948 "Home Rule Act of the Faroe Islands" sets out the terms of Faroese home rule. The Act states, "...the Faroe Islands shall constitute a self-governing community within the State of Denmark."[1] It establishes the home government of the Faroe Islands (Landsstýrið) and the Faroese parliament, the Løgting. More significantly, the Act specifies the powers devolved from the Government of Denmark, including: local government and municipal affairs; taxation, at a local and territorial level; public services, including police and town planning; welfare services, such as housing; primary and secondary education; Archives, libraries, museums; agriculture and fishing; entertainment; among other areas.[1] The Faroe Islands were previously administered as a Danish county (amt); the Home Rule Act abolished the post of Amtmand (County Governor) and replaced it with the role of Rigsombudsmand (High Commissioner to the Danish government).[1] These powers were expanded in a 2005 Act, which named the Faroese home government as an "equal partner" with the Danish government.[20]

The 1978 "Greenland Home Rule Act" devolves powers in much the same way as the Faroese Home Rule Act. It sets out a home rule government and Greenlandic parliament. Specific areas of governance specified in the act include: Organization of local government; Fishing and agriculture; Welfare system; protection of the environment; other areas affecting Greenlanders directly, etc.[2]

On 21 June 2009, Greenland assumed self-determination with responsibility for self-government of judicial affairs, policing, natural resources, immigration and border controls. Also, Greenlanders were recognized as a separate people under international law.[21] Greenland is now described as having "self rule", with its home government exercising a wider range of powers.

There are a number of matters that can not be acquired by the territories; Constitutional affairs, foreign policy, defence, the Supreme Court, citizenship, and monetary policy. Additionally, the Faroese and Greenlandic parliaments are subordinate to the Parliament of the Kingdom of Denmark, where the two territories are represented by two seats each (from a total of 179 seats).

The arrangement between the areas of the Realm is sometimes described as constituent countries. Greenland's powers of self-government were increased in 2009 through the Greenland Self-Rule Act, which established the Greenlanders as a separate national people under international law, while the Faroe Islands have gradually taken control of more and more areas according to their Home Rule Act from 1948.[22] The Faroese/Danish act of 2005 states "This law is based on an agreement between the Governments of the Faroe Islands and Denmark as equal partners."[23] Despite this principle of unity among the three territories, some commentators consider the Danish Realm as a federation or a sui generis legal construction. In the opinion of Bogi Eliasen, the Kingdom of Denmark is not a unitary state "but a structure with some federative elements of divided power".[13] Danish justice Frederik Harhoff states that the Kingdom of Denmark is "neither a federation (since it lacks a treaty to this effect), nor is it a confederation"[13]

Previously, most foreign relations were undertaken by the Government of Denmark exclusively on behalf of the entire realm, but more recently the Faroe Islands and Greenland have increased their role in the foreign policy. Representatives for both have joined Danish delegations in discussions on some international matters, such as fishing rights. Greenlandic representatives were included in the process of a new treaty between Denmark and the US regarding the Thule Air Base in northwest Greenland.

The Kingdom of Denmark as a whole is a member of the United Nations, NATO, the OECD and the World Trade Organization. The Faroe Islands and Greenland are associated members of the Nordic Council in their own right as part of the wider membership of the Kingdom. Although Denmark is a member of the European Union, both areas have special dispensation and remain outside the EU. Greenland joined the EU as part of Denmark in 1973, but opted to leave in 1985 after Greenlandic home rule was introduced in 1979. 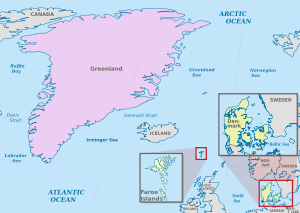 The disparity between the small population of the former colonies and the greater population of Denmark has helped to enforce the hegemonial position that Denmark holds in the Realm. When the areas of the three territories are combined, the Kingdom of Denmark ranks as the twelfth largest country in the world, the same rank held by Greenland alone.

Hjemmestyre
Meaning "home rule", it indicates an autonomous administration (present in both in Greenland and the Faroe Islands) that has power over all internal affairs. In this arrangement, the Danish government deals only with external matters such as defence and foreign affairs. Greenland and the Faroe Islands maintain their own parliaments and governments, headed by a prime minister who appoints a cabinet. This is synonymous with "self-governing."

Selvstyre
Following a referendum on 25 November 2008 (the 30th anniversary of the establishment of home rule in Greenland), the relationship between the Danish and Greenlandic governments changed, with Greenland gaining greater autonomy. Further powers were granted to the Greenlandic government on 21 June 2009, including control of the police force, coastguard, and courts. Additionally, Greenland now receives fewer Danish subsidies, becoming more self-sufficient.[26] As a result of these changes Greenland was now said to have self rule with minimal support from Denmark, as opposed to "home rule".

Rigsombudsmand
High Commissioners represent the interests of Denmark in the Faroe Islands and Greenland. There is one Danish High Commissioner in each country. He or she can attend the meetings at the Løgting in the Faroes and at the Inatsisartut in Greenland, but they can't vote.

Folketingsmedlemmer fra Færøerne og Grønland
Members of Folketing from the Faroe Islands and Greenland: Greenland and the Faroe Islands and their self-rule administrations take part in consultations on policies and decisions affecting their region, including negotiations with the devolved legislatures and the Danish parliament (Folketing). They have two members each, and these are full members of the Danish Folketing and are allowed to vote.