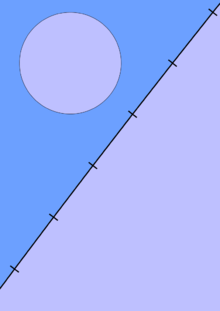 A whole regular chiliagon is not visually discernible from a circle. The lower section is a portion of a regular chiliagon, 200 times as large as the smaller one, with the vertices highlighted.

In geometry, a chiliagon (pronounced /ˈkɪli.əɡɒn/) or 1000-gon is a polygon with 1000 sides. Philosophers commonly refer to chiliagons to illustrate ideas about the nature and workings of thought, meaning, and mental representation.

This result differs from the area of its circumscribed circle by less than 4 parts per million.

René Descartes uses the chiliagon as an example in his Sixth Meditation to demonstrate the difference between pure intellection and imagination. He says that, when one thinks of a chiliagon, he "does not imagine the thousand sides or see them as if they were present" before him – as he does when one imagines a triangle, for example. The imagination constructs a "confused representation," which is no different from that which it constructs of a myriagon (a polygon with ten thousand sides). However, he does clearly understand what a chiliagon is, just as he understands what a triangle is, and he is able to distinguish it from a myriagon. Therefore, the intellect is not dependent on imagination, Descartes claims, as it is able to entertain clear and distinct ideas when imagination is unable to.[1] Philosopher Pierre Gassendi, a contemporary of Descartes, was critical of this interpretation, believing that while Descartes could imagine a chiliagon, he could not understand it: one could "perceive that the word 'chiliagon' signiﬁes a ﬁgure with a thousand angles [but] that is just the meaning of the term, and it does not follow that you understand the thousand angles of the ﬁgure any better than you imagine them."[2]

The example of a chiliagon is also referenced by other philosophers, such as Immanuel Kant.[3] David Hume points out that it is "impossible for the eye to determine the angles of a chiliagon to be equal to 1996 right angles, or make any conjecture, that approaches this proportion."[4] Gottfried Leibniz comments on a use of the chiliagon by John Locke, noting that one can have an idea of the polygon without having an image of it, and thus distinguishing ideas from images.[5]

Henri Poincaré uses the chiliagon as evidence that "intuition is not necessarily founded on the evidence of the senses" because "we can not represent to ourselves a chiliagon, and yet we reason by intuition on polygons in general, which include the chiliagon as a particular case."[6]

Inspired by Descartes's chiliagon example, Roderick Chisholm and other 20th-century philosophers have used similar examples to make similar points. Chisholm's speckled hen, which need not have a determinate number of speckles to be successfully imagined, is perhaps the most famous of these.[7] 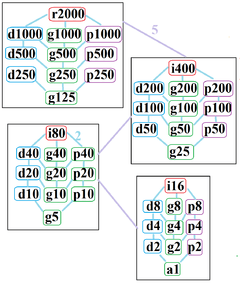 The symmetries of a regular chiliagon. Light blue lines show subgroups of index 2. The 4 boxed subgraphs are positionally related by index 5 subgroups.