The Delaware Wing Civil Air Patrol is the highest echelon of Civil Air Patrol (CAP) in the state of Delaware. Delaware Wing headquarters is located at the New Castle County Airport. It comprises eight squadrons from Claymont to Georgetown, and a unit just over the border in Elkton, MD. Delaware Wing is abbreviated as DEWG. As a federally chartered organization, CAP has 3 primary missions as instructed by congress. The missions include providing aerospace education and training for all of its members, teaching leadership skills to Delaware youth, and performing various domestic emergency services for the United States of America in a noncombatant capacity.

Delaware Wing has a long CAP history since CAP's inception in 1941. Delaware is home to one of the original "Coastal Patrol" units, based in Rehoboth Beach.[2] Using private aircraft, the "Flying Minute Men" patrolled the Atlantic Ocean for German submarines. They operated off of a small, unpaved airport near Airport Road in Delaware.[3] Civil Air Patrol planes that crashed in the line of duty while patrolling the East Coast during World War II were hauled to the historical Dover Post building, which was an aircraft hangar at the time.[4] 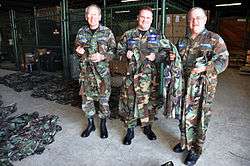 Delaware Wing works in all three CAP missions: Cadet Programs, Aerospace Education, and Emergency Services. Most notably, Delaware Wing regularly assists DelDOT through the use of CAP planes, including Cessna 172 Skyhawks and Cessna 182 Skylanes. Delaware Wing has six corporate aircraft, one of which is a state-of-the-art Cessna 182 with a Glass Cockpit. For example, CAP aircraft monitor traffic during the Sprint Cup Series at Dover International Speedway in Dover, DE. In addition, CAP aircraft monitors daily traffic volume and reports to DelDOT road blockages from downed trees or a major accident, street and highway flooding, collapsed or washed-out bridges, and weekend beach traffic.[5] By working closely with DelDOT, responders can be dispatched promptly and road crews can be summoned to block off accident sites while rerouting traffic if necessary.[6]

Delaware Wing has excelled in the National Cadet Competition, where the top CAP cadets across the country compete. Diamond Flight Drill Team, Delaware Wing's team, has won one National competition and numerous regional competitions. Delaware Wing annually holds in a Wing Picnic held at Fort Dupont, Cadet Ball, Wing Conference, and Rocket Launch. Held in January, the annual Cadet Ball, hosted by the Delaware Wing Cadet Advisory Council, draws seventy cadets each year from Delaware and neighboring wings. The Delaware Wing Conference and Banquet, held in March, analyzes the accomplishments of the previous year and sets goals for the upcoming year. Notable guest speakers make the conference worthwhile to attend and various awards are presented during the day. During the 2006 Wing Conference and Banquet, Mary Feik and Judge M. Jane Brady, a Superior Court judge, were the guest speakers. At the banquet in the evening, major CAP milestone awards are presented and select CAP members are promoted to new ranks. In May, CAP members assist the Delaware AeroSpace Education Foundation in launching model rockets of various sizes (many as large as six feet tall) at Cape Henlopen State Park during Rockets for Delaware. Often, CAP cadets will choose to camp there the night before to enhance their skills in Emergency Services.

Delaware Wing coordinates with Maryland Wing and National Capital to hold Tri-Wing Encampment every year at Aberdeen Proving Grounds in Maryland. Delaware Wing is one of the few wings who does not have its own encampment due to its small population and area. 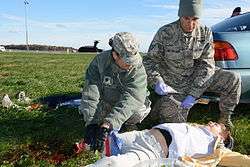 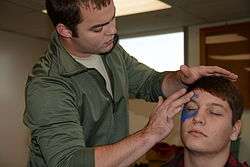 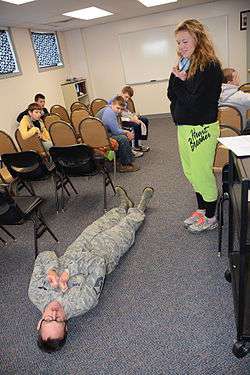 Master Sgt. Robert Burns demonstrates to a Delaware Wing CAP cadet how to play a victim during a mass casualty exercise.

Delaware Wing has had 21 Wing Commanders since the inception of Civil Air Patrol.

In 2006, Delaware Wing received a Unit Citation. In the fiscal year 2005, they had the highest number of hours flown per aircraft than any other wing in Civil Air Patrol by over 60%, a very wide margin.[9] In addition, they have earned one of the best compliance Inspection grades in the country over the past 5 years. Both Delaware's Diamond Flight Drill Team and their Color Guard won the Middle East Region competition in 2005, the first time Delaware Wing has ever won both in the same year. Delaware Wing has also earned the Counterdrug Wing of the Year for the 6th year in a row, and the Drug Demand Reduction Wing of the Year.

Delaware Wing's Lt Col John McGaha was featured in the Nov/Dec 2008 edition of CAP's Volunteer Magazine. He was named National Senior Member of the Year this past August. The story speaks of his lifelong dedication to the cadet program. [10]