Oita Trinita (大分トリニータ, Ōita Torinīta) is a Japanese football club currently playing in the J3 League team. The team name Trinita can be considered either a combination of the English word trinity and Ōita, or the Italian word trinità. The dual meaning expresses the will of the citizens, companies, and local governments to support the team. 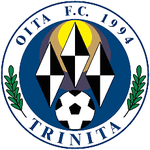 The team started as Oita Trinity in 1994 and advanced through the Ōita Prefectural League, Kyushu League and finished as the runner-up at the 1996 National League, resulting in promotion to the JFL. In 1999, they changed their name to Trinita due to a copyright infringement, joined the J2 league and placed third. The team also placed third in 2000, and despite being in competition for promotion till the last game, it finished in sixth the next season. The following year, it won the J2 league championship and finally earned promoted to the J1 league. In 2008, they won J.League Cup, the first major title won by a Kyūshū club since the former Yawata Steel club's Emperor's Cup wins of the 1960s.[1]

In 2009 season, they suffered worst-ever results in their seven-year J1 history, including 14-game straight loss for league matches, which is the current worst record of J.League since Golden goal system is eliminated, at the earlier stage. They even fired cup-winning manager Pericles Chamusca in mid July.[2] On October 25, their relegation to J2 from 2010 season is determined after being held to a 1–1 draw by ten-man Kyoto Sanga F.C.. Though, according to J.League's regulation, Oita would face relegation anyway due to the acceptance of official funding (by the regulation, any team receive this funding will not be allowed staying in Division 1, unless paid back in the future).[3]

In their 3rd year in J.League Division 2 in 2012, they finished at 6th place. As the introduction of promotion playoffs and they had paid back the fund on October, they were given chance of promotion. They defeated Kyoto Sanga F.C. by 4–0 at the semi-final and JEF United Ichihara Chiba 1–0 at the final, thus to be promoted to 2013 J.League Division 1, back to the top division first time since 2008 season.[4] This time, however, their top flight stay lasted only one season. In 2015 they were relegated to J3 League after losing promotion playoffs to Machida Zelvia !Machida Zelvia on December 6,[5] thereby becoming the first major trophy winner to be relegated to the third tier.

As of 26 October 2016.[6] Note: Flags indicate national team as defined under FIFA eligibility rules. Players may hold more than one non-FIFA nationality.