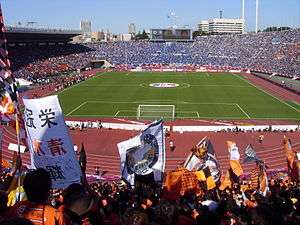 The 2008 edition of the J. League Cup sponsored by Nabisco began on March 20. The top 4 teams of each qualifying group automatically qualified for the quarter-finals along with the best two remaining runners-up. Both Gamba Osaka and Kashima Antlers received a bye to the quarter-final stage due to their participation in the group stage of the Asian Champions League.

Oita Trinita defeated Shimizu S-Pulse 2-0 in the final on November 1 at the Tokyo National Stadium. They qualified for the 2009 Pan-Pacific Championship and the 2009 Suruga Bank Championship.

Gamba Osaka advances to the semi finals on Away goals rule.

This article is issued from Wikipedia - version of the 11/8/2015. The text is available under the Creative Commons Attribution/Share Alike but additional terms may apply for the media files.