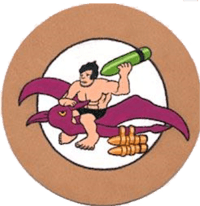 The 407th Air Refueling Squadron is an inactive United States Air Force unit. Its last was assigned to the 42d Bombardment Wing, stationed at Loring Air Force Base, Maine. It was inactivated on 1 October 1990.

Activated as a B-17 Flying Fortress reconnaissance squadron in early 1942; trained by Third Air Force in the southeastern United States. Performed antisubmarine duty while training in Florida, March–July 1942.

Deployed to European Theater of Operations (ETO), being assigned to VIII Bomber Command in England, one of the first squadrons being assigned to the command. In the ETO, the squadron initially trained replacement crews for combat at RAF Bovingdon. Upon completion of its training mission, the 407th moved to RAF Alconbury on 6 January 1943 where it and its parent 92d Bombardment Group underwent reorganization. When they emerged in May 1943, the 92 BG and 407 BS were ready for combat. The group's B-17s, flew their first post-reorganization combat mission on 15 May 1943, and participated in the air offensive over Nazi Germany and Occupied Europe until German capitulation in May 1945.

Reassigned to Air Transport Command in June 1945 as part of Operation Green. Used B-17s as transports, flying demobilized personnel to ATC sites in Morocco and Azores from France. Aircraft turrets were removed and re-skinned, the bomb racks removed, flooring and seating installed to accommodate 30 passengers. The flight crew was reduced to pilot, co-pilot, navigator, flight engineer and radio operator. In addition the engineer and radio operator would act as stewards, to assist and calm the many first time flyers. Inactivated in February 1946.

Reactivated and redesignated by Strategic Air Command as an air refueling squadron in November 1953. From Activation in 1953 until summer of 1957, the 407th Air Refueling Squadron deployed KB-29 aircraft and crews on air refueling missions to many parts of the world, participating in a continuing series of strategic exercises as required by Strategic Air Command. The unit conducted similar operations with the KC-97 aircraft between Jul 1957 and Jul 1961, and with the KC-135 aircraft after Jul 1962, providing air refueling support for various kinds of aircraft from several commands on missions ranging from regional movements to intercontinental flights. Inactivated in October 1990.