Gardens of the French Renaissance 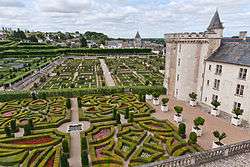 Gardens of the Château de Villandry 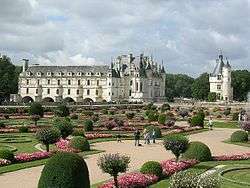 View of the Diane de Poitiers' garden from the Château de Chenonceau. 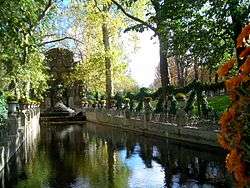 The Gardens of the French Renaissance is a garden style, initially inspired by the Italian Renaissance garden, which evolved later into the grander and more formal Garden à la française during the reign of Louis XIV, by the middle of the 17th century.

In 1495, King Charles VIII and his nobles brought the Renaissance style back to France after their war campaign in Italy.[1] They reached their peak in the gardens of the royal Château de Fontainebleau, the Château de Blois, the Château d'Amboise, and the Château de Chenonceau.

French Renaissance gardens were characterized by symmetrical and geometric planting beds or parterres; plants in pots; paths of gravel and sand; terraces; stairways and ramps; moving water in the form of canals, cascades and monumental fountains, and extensive use of artificial grottoes, labyrinths and statues of mythological figures. They became an extension of the châteaux that they surrounded, and were designed to illustrate the Renaissance ideals of measure and proportion, and to remind viewers of the virtues of Ancient Rome.[2]

In the 13th century, the Italian landscape architect Pietro de' Crescenzi wrote a treatise called Opus Ruralium Commodium, which laid out a formal plan for gardens, ornamented with topiary sculptures, trees and bushes trimmed into architectural shapes, following a tradition begun by the Romans. King Charles V of France ordered a French translation in 1373, and the new Italian style began to appear in France.[3]

Another influential writer was Leon Battista Alberti (1404–1472), who in 1450 wrote a tract, De re aedificatoria for Lorenzo de' Medici, he used the geometric principles of Vitruvius to design building façades and gardens. He suggested that the house should look over the garden, and that the garden should have "porticos for giving shade, cradles where vines grow on columns of marble, and there should be vases and even amusing statues, provided that they are not obscene." [4]

In his design of the gardens of the Belvedere in Rome, the architect Bramante (1444–1544) introduced the idea of perspective, using a long axis perpendicular to the palace, along which he placed parterres and fountains.[5] This became a central feature of Renaissance gardens.

A popular novel by the monk Francesco Colonna, published in Venice in 1499, called The Dream of Poliphile, an allegorical journey by a traveler, Poliphile, to fantastic lands in search of his love, Polia, had an enormous influence upon gardens of the time. The ideas of a "garden-island" in a lake, such as the one in the Boboli Gardens in Florence, of statues of giants coming out of earth in the Park of the villa de Pratolino, and the theme of labyrinth were all taken from the imaginary voyages of Poliphile.[6] All these elements were to appear in French Renaissance gardens.

The Gardens of the Château d'Amboise, Blois, Gaillon and Bury

Gardens of the Château de Blois, about 1570.

In 1495, Charles VIII invaded the kingdom of Naples, and he and his court saw the luxury of the palaces and gardens in Italy. When he returned to France, he brought back with him a number of Italian artists, including priest and garden designer from Naples named Pacello da Mercogliano. Charles ordered the addition of Renaissance features to his royal residence of the Château d'Amboise on the banks of the Loire. Mercogliano extended the terrace of the château, surrounded it by galleries, and laid out four parterres around a central pavilion.[7]

At the beginning of the 16th century, King Francis I, who had also visited Italy and had met Leonardo da Vinci, built gardens in the new style on three terraces of different levels bordered by the old walls of his Château de Blois. Besides the parterres of flowers, the gardens produced a wide variety of vegetables and fruits, including orange and lemon trees in boxes, which were taken indoors in winter. The building that sheltered them, still standing, was the first orangerie in France. The gardens were on the site of the present-day Place Victor-Hugo and the site of the railways station. The last vestiges of the garden were destroyed in 1890 by the construction of the Avenue Victor-Hugo.

At about the same time, Mercogliano designed gardens for the Château de Gaillon, owned by Cardinal Georges d'Amboise, a Minister of King Henry IV, who had also spent time in Italy. The gardens, built on different levels below the old medieval château, were planted in parterres of flowers and fruit trees. The parterre at the entrance of the garden featured the coat of arms of France in flowers. Bushes were trimmed into the shapes of men on horseback, ships, and birds. It was also decorated with imposing fountains of marble.[8] 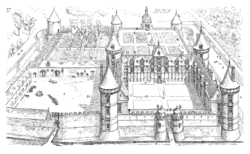 The gardens of the Château de Bury were built between 1511 and 1524 by Florimont Robertet, a Secretary of State for both Louis XII and Francis I. Robertet had visited the villa Medici in at Fiesole, and wanted to reproduce the terraced gardens he saw there. The château, departing from the traditional design of castles, was integrated closely with its gardens. Visitors passed through a square garden inside the castle and out into two geometric gardens behind the château, decorated with fountains and surrounded by a wooden gallery. The axis went from the entrance to the chapel, at the far end of the garden. Like Italian Renaissance gardens, the gardens of Bury were elocated on the edge of a hill, with a fine view of the forest of Blois.[9] In the center of the court of the château, Robertet placed a bronze copy of Michelangelo's David, which had been given to him by the Republic of Florence.[10] 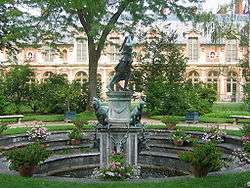 Fountain of Diana, in the gardens of the Château de Fontainebleau.

The Gardens of the Château de Fontainebleau, located in forest which had been the hunting preserve of the Capetian Kings of France, were created by Francis I of France beginning in 1528. The garden featured fountains, parterres, a forest of pine trees brought from Provence and the first artificial grotto in France in 1541. Catherine de' Medici ordered copies in bronze of the statues which decorated the Belvedere in Rome. A statue of Hercules in repose by Michelangelo decorated the garden of the lake. In 1594 Henry IV added a small island in the lake connected to the court of fountains by a bridge.[11]

The Gardens of Chenonceau

The Château de Chenonceau had two separate gardens, the first created in 1551 for Diane de Poitiers, the favorite of King Henry II, with a large parterre and a jet of water, and a second, smaller garden created for Catherine de' Medici in 1560, on a terrace raised above the river Cher, divided into compartments, with a basin in the center.

The gardens of the Château de Saint-Germain-en-Laye marked the beginning of the transition to a new style, which would be called the Garden à la française. The garden was laid out in 1595 by royal gardener Charles Mollet for Henry IV.

Chronology of the French Renaissance Garden [12] 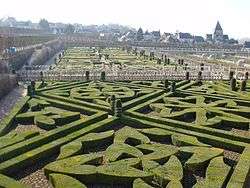 Garden of the Château de Villandry 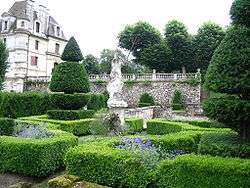 Garden of the Château d'Ambleville