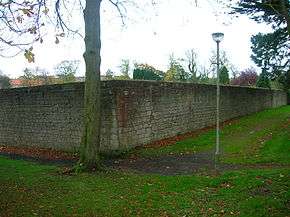 The exterior of a typical walled garden where the stone acts as a slow-release reradiator of solar energy.

A walled garden is a garden enclosed by high walls for horticultural rather than security purposes, although originally all gardens may have been enclosed for protection from animal or human intruders. In temperate climates, the essential function of the walls surrounding a walled garden is to shelter the garden from wind and frost, though they may also serve a decorative purpose. 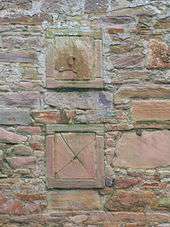 Movable blocks to control the movement of hot air in the heated wall at Eglinton Country Park.

The shelter provided by enclosing walls can raise the ambient temperature within a garden by several degrees, creating a microclimate that permits plants to be grown that would not survive in the unmodified local climate.

Most walls are constructed from stone or brick, which absorb and retain solar heat and then slowly release it, raising the temperature against the wall, allowing peaches, nectarines, and grapes to be grown as espaliers against south-facing walls as far north as southeast Great Britain and southern Ireland.

The ability of a well-designed walled garden to create widely varying stable environments is illustrated by this description of the rock garden in the Jardin des Plantes in Paris’ 5ème arrondissement, where over 2,000 species from a variety of climate zones ranging from mountainous to Mediterranean are grown within a few acres:

The garden is protected from sudden changes in weather conditions and from harsh winds, thanks to its hollowed out terraces and the big trees …. The gardeners make the most of the northern or southern exposures and the permanently shady areas of this little, sheltered valley. Within just a few metres, temperatures can range from 15 to 20 degrees C, what one would call a micro-climate![1]

A number of walled gardens in Britain have one hollow wall with openings in the stonework on the side facing towards the garden, so that fires could be lit inside the wall to provide additional heat to protect the fruit growing against the wall. Heat would escape into the garden through these openings, and the smoke from the fires would be directed upwards through chimneys or flues. This kind of hollow wall is found at Croxteth Hall in Liverpool (England), and Eglinton Country Park and Dunmore House, both in Scotland. In the 1800s, such walls were lined with pipes and connected to a boiler, as at Bank Hall in Bretherton.

The traditional design of a walled garden, split into four quarters separated by paths, and a wellhead or pool at the centre, dates back to the very earliest gardens of Persia. The hortus conclusus or "enclosed garden" of High Medieval Europe was more typically enclosed by hedges or fencing, or the arcades of a cloister; though some protection from weather and effective protection from straying animals was afforded, these were not specifically walled gardens.

In the United Kingdom, many country houses also had walled kitchen gardens—which are distinct from decorative gardens—ranging in extent from one acre to 20 or even 30 acres, "depending on the size of the household. One acre was expected to supply enough produce for twelve people."[2] The very largest gardens served extremely large households; for example, the royal kitchen garden at Windsor, built for Queen Victoria in 1844, initially occupied 22 acres and was subsequently enlarged to cover 31 acres.[3] Kitchen gardens received their greatest elaboration in the second half of the 19th century.[4] Many of these labour-intensive gardens fell into disuse in the 20th century, but others have been revived to house primarily decorative gardens, some of which also produce fruit, vegetables and flowers for cutting.

Susan Campbell, in a book devoted to walled kitchen gardens, mentions several factors which contribute to the productiveness of a kitchen garden:

Productiveness depended upon the suitability of the situation; on the provision of water, manure and heat; on a sufficiency of wall space, glass, storage places and workrooms; and, above all, on a dedicated team of gardeners.[2]

The walled kitchen garden at Croome Court, Worcestershire is reputedly the largest 18th-century walled kitchen garden in Europe. It is in private ownership and has been restored by the current owners, Chris and Karen Cronin. In about 1806, a 13 ft (4.0 m) high free-standing east-west hot wall was built, slightly off-centre, serviced by five furnaces; this is historically significant as it is one of the first such structures to be built.[5]

The walled kitchen garden at Chilton Foliat, Wiltshire, was the subject of the 1987 television documentary series The Victorian Kitchen Garden. 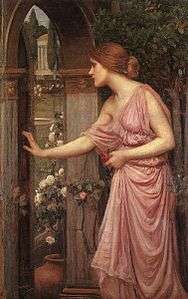 In the story of Susanna and the Elders, a walled garden is the scene of both an alleged tryst and an attempted rape. Because of the walls, the community is unable to determine which actually occurred.

In John William Waterhouse's interpretation of the myth of Cupid and Psyche, Psyche lived in Cupid's walled garden.

Much of the storyline of Frances Hodgson Burnett's children's story The Secret Garden revolves around a walled garden which has been locked for ten years.

"Rappaccini's Daughter", a short story by Nathaniel Hawthorne, takes place almost entirely within the confines of a walled garden in which Beatrice, the lovely daughter of a mad scientist, lives alongside gorgeous but lethal flowers.