Vegan organic gardening and farming is the organic cultivation and production of food crops and other crops with a minimal amount of exploitation or harm to any animal.[1] Vegan gardening and stock-free farming methods use no animal products or by-products, such as bloodmeal, fish products, bone meal, feces, or other animal-origin matter, because the production of these materials is viewed as either harming animals directly, or being associated with the exploitation and consequent suffering of animals. Some of these materials are by-products of animal husbandry, created during the process of cultivating animals for the production of meat, milk, skins, furs, entertainment, labor, or companionship; the sale of by-products decreases expenses and increases profit for those engaged in animal husbandry, and therefore helps support the animal husbandry industry, an outcome most vegans find unacceptable.[2] 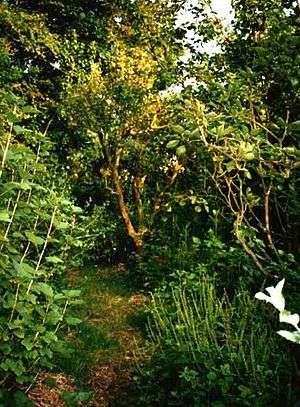 Forest gardening is a fully plant-based organic food production system based on woodland ecosystems, incorporating fruit and nut trees, shrubs, herbs, vines and perennial vegetables.[3] Making use of companion planting, these can be intermixed to grow in a succession of layers, to replicate a woodland habitat. Forest gardening can be viewed as a way to recreate the Garden of Eden.[4] The three main products from a forest garden are fruit, nuts and green leafy vegetables.[5]

Robert Hart adapted forest gardening for temperate zones during the early 1960s. Robert Hart began with a conventional smallholding at Wenlock Edge in Shropshire. However, following his adoption of a raw vegan diet for health and personal reasons, Hart replaced his farm animals with plants. He created a model forest garden from a small orchard on his farm and intended naming his gardening method ecological horticulture or ecocultivation.[6] Hart later dropped these terms once he became aware that agroforestry and forest gardens were already being used to describe similar systems in other parts of the world.[7]

The veganic gardening method is a distinct system developed by Rosa Dalziell O'Brien, Kenneth Dalziel O'Brien and May E. Bruce, although the term was originally coined by Geoffrey Rudd as a contraction of vegetable organic in order to "denote a clear distinction between conventional chemical based systems and organic ones based on animal manures".[10] The O'Brien system's principal argument is that animal manures are harmful to soil health rather than that their use involves exploitation of and cruelty to animals.

The system employs very specific techniques including the addition of straw and other vegetable wastes to the soil in order to maintain soil fertility. Gardeners following the system use soil-covering mulches, and employ non-compacting surface cultivation techniques using any short-handled, wide-bladed, hand hoe. They kneel when surface cultivating, placing a board under their knees to spread out the pressure, and prevent soil compaction. Kenneth Dalziel O'Brien published a description of his system in Veganic Gardening, the Alternative System for Healthier Crops:

The veganic method of clearing heavily infested land is to take advantage of a plant's tendencies to move its roots nearer to the soil's surface when it is deprived of light. To make use of this principle, aided by a decaying process of the top growth of weeds, etc., it is necessary to subject such growth to heat and moisture in order to speed up the decay, and this is done by applying lime, then a heavy straw cover, and then the herbal compost activator…The following are required: Sufficient new straw to cover an area to be cleared to a depth of 3 to 4 inches.[11]

The O'Brien method also advocates minimal disturbance of the soil by tilling, the use of cover crops and green manures, the creation of permanent raised beds and permanent hard-packed paths between them, the alignment of beds along a north-south axis, and planting in double rows or more so that not every row has a path on both sides. Use of animal manure is prohibited.

The German agricultural researcher Maria Thun (1922 - 2012)[12] developed vegan equivalents to the traditional, animal based biodynamic preparations. As a reaction to the BSE scandal in Europe she started researching plant based preparations, using tree barks as replacement for animal organs as sheath for the preparations.[13]

In particular in Italy, there is a movement of vegan biodynamic farming, represented by farmers such as Sebastiano Cossia Castiglioni [14] and Cristina Menicocci.[15]

There are many other methods currently used and under development.

Soil fertility is maintained by the use of green manures, cover crops, green wastes, composted vegetable matter, and minerals. Some vegan gardeners may supplement this with human urine from vegans (which provides nitrogen) and 'humanure' from vegans, produced from compost toilets.[2] Generally only waste from vegans is used because of the expert recommendation that the risks associated with using composted waste are acceptable only if the waste is from animals or humans having a largely herbivorous diet.[16]

Veganic gardeners may prepare soil for cultivation using the same method used by conventional and organic gardeners of breaking up the soil with hand tools and power tools and allowing the weeds to decompose.