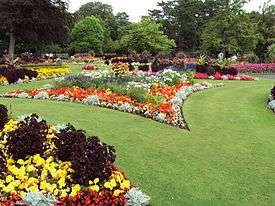 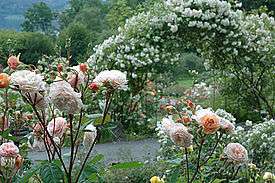 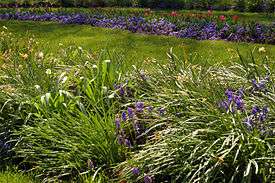 A flower garden is any garden where flowers are grown for decorative purposes.

Because flowers bloom at varying times of the year, and some plants are annual, dying each winter, the design of flower gardens can take into consideration maintaining a sequence of bloom and even of consistent color combinations, through varying seasons. Besides organizing the flowers in bedding-out schemes limited to annual and perennial flower beds, careful design also takes the labour time, and the color pattern of the flowers into account.

The labour time can be decreased by using techniques such as mulching, companion planting, use of specific flowers/plants suppressing grass, ... in the vicinity (i.e. Rhinanthus,[1][2][3] ...)

Flower color is another important feature of both the herbaceous border and the mixed border that includes shrubs as well as herbaceous plants. Flower gardens are sometimes tied in function to other kinds of gardens, like knot gardens or herb gardens, many herbs also having decorative function, and some decorative flowers being edible.

A simpler alternative to the designed flower garden is the "wildflower" seed mix, with assortments of seeds which will create a bed that contains flowers of various blooming seasons, so that some portion of them should always be in bloom. The best mixtures even include combinations of perennial and biennials, which may not bloom until the following year, and also annuals that are "self-seeding", so they will return, creating a permanent flowerbed.

Another, even more recent trend is the "flower garden in a box", where the entire design of a flower garden is pre-packaged, with separate packets of each kind of flower, and a careful layout to be followed to create the proposed pattern of color in the garden-to-be.

Many, if not most, plants considered decorative flowers originated as weeds, which if attractive enough would sometimes be tolerated by farmers because of their appeal. This led to an artificial selection process, producing ever-prettier (to humans) flowers. This is thought to have occurred for the entire history of agriculture, perhaps even slightly earlier, when people tended to favor naturally occurring food-gathering spots. This may also explain why many flowers function as companion plants to more useful agricultural plants; they had evolved that symbiotic relationship with the food plants before either was domesticated, and therefore was found in the same area, convenient to be selected as an attractive plant.

Once domesticated, though, most flowers were grown either separately or as part of gardens having some other primary function. In the West, the idea of gardens dedicated to flowers did not become common until the 19th century, though in fact many modern gardens are indeed flower gardens.

Flower gardens are, indeed, a key factor in modern landscape design and even architecture, especially for large businesses, some of which pay to have large flower gardens torn out and replaced entirely each season, in order to keep the color patterns consistent.

A functional garden used to grow flowers for indoor use rather than outdoor display is known as a cutting garden. It is usually only a feature of large residences.

The cutting garden is typically placed in a fertile and sunlight position out of public view and is not artistically arranged, as it contains flowers for cutting. The cutting garden may comprise a herb garden and ornamental vegetables as well.

This article is issued from Wikipedia - version of the 9/22/2015. The text is available under the Creative Commons Attribution/Share Alike but additional terms may apply for the media files.