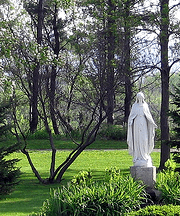 A Mary Garden is a small sacred garden enclosing a statue or shrine of the Virgin Mary, who is known to many Christians as the Blessed Virgin, Our Lady, or the Mother of God.[1] In the New Testament, Mary is the mother of Jesus of Nazareth. Mary gardens are most common to those Christian denominations which hold the Virgin Mary in special esteem, particularly Roman Catholics and Anglicans.

The practice originated among monasteries and convents in medieval Europe. During the Middle Ages, people saw reminders of Mary in the flowers and herbs growing around them.[2][3] The first reference to an actual garden dedicated to Mary is from the life of St. Fiacre, Irish patron saint of gardening, who planted and tended a garden around the oratory to Our Lady he built at his famous hospice for the poor and infirm in France in the 7th Century. The first record of a flower actually named for Mary is that of "seint mary gouldes" (St. Mary's Gold or Marygold) for the Pot Marigold or Calendula, in a 1373 English recipe for a potion to ward off the plague.[4]

The first such garden open to the public in the United States was founded in 1932 at St. Joseph's Church, Woods Hole, Cape Cod, Massachusetts.[5] This garden was founded Mrs. Frances Crane Lillie of Chicago, and a summer resident of Woods Hole. It was Mrs. Lillie's recollection of the symbolic herbs and flowers that she had encountered in England that prompted her to conceive and donate a Mary Garden to St. Joseph's Church.[3]

Inspired by the St. Joseph's Mary Garden in Woods Hole, Edward A. G. McTague and John S. Stokes, Jr. founded "Mary's Gardens" of Philadelphia in 1951 as a project to research flowers identified with Mary, and make available seeds and plant source information for starting Mary Gardens. They also initiated a series of articles in religious publications to encourage the planting of Mary gardens.[4]

A Mary garden may be a single indoor pot, a large plot outdoors, or anything in between. They can be found at parishes, schools, homes, shrines, convents and other institutions.[6]

The statue of Mary, sometimes holding the Infant Christ, is central to the garden. Select flowers, shrubs, and trees associated with the legends about Mary are planted in the garden. Such plants may include laurel trees, strawberries, ladyslippers, lilies of the valley, peonies, violets, irises and roses, all of which are identified as symbolic and significant in the story of Mary as recounted in the Bible and other Christian stories. Gardens may have benches and a facility for lighting votive candles.

It demonstrates devotional commitment through the spiritual practice of designing, building and maintaining the garden and for the attendance, contemplation, and prayers of visitors. Mary gardens are similar to the Zen meditation gardens found in the Buddhist tradition, with the exception that a Mary Garden pays homage to a person, the Virgin Mary, whereas a meditation garden in the East Asian traditions does not focus on a person.[7][8][9]

More than 30 flowers and herbs are connected to legends about Mary’s life.[2] Mary was associated with this passage from the Song of Songs: "I am the Rose of Sharon, the lily of the valleys." (2:1) A legend from the second century says that when Mary's tomb was opened to show Thomas that her body had been assumed into heaven, it was filled with roses and lilies.[10]