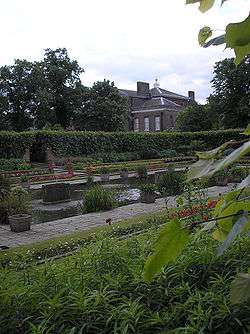 The Dutch garden is distinguished by its dense atmosphere and efficient use of space. On an international level, a garden with tulips is also easily labelled as a Dutch garden.

In England, Dutch garden was the description given to a particular type of rectangular garden space, often enclosed within hedges or walls, even if part of a larger garden or parkland. This space would be laid out in a highly cultivated and geometrical, often symmetrical, fashion, shaped by dense plantings of highly coloured flowers, and edged with box or other dense and clipped shrubs, or low walls (sometimes in geometrical patterns), and sometimes, also, with areas of artificial water, with fountains and water butts, which were also laid out in symmetrical arrangements. The flower beds and areas of water would be intersected by geometrical path patterns, to make it possible to walk around the garden without damaging any of its features. An example is to be found adjacent to Kensington Palace, due south of the orangery. Another example, less ambitious, is at Clandon Park in Surrey. The Dutch garden, with its geometry and formality, was in opposition to the Cottage garden, which is characterised by grass, winding and asymmetrical paths (if any) and a blurring of the lines between flowers and grass by allowing shrubs to grow over flower bed boundaries.

The placement of flowers and shrubs in the Dutch garden in Holland, however, may be non-linear and informal, though still efficiently making use of space and light. Because the Netherlands is one of the most densely populated countries, gardens are generally small and because houses are placed right next to each other, there is not very much light available. Because of these restrictions, the distinctive style of garden design associated with the Dutch emerged.

Common flowers in the Dutch garden are:

Some noteworthy public Dutch gardens are: