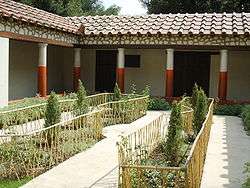 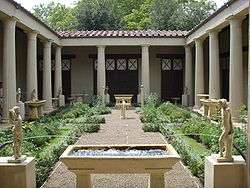 Roman gardens (Latin: hortus) and ornamental horticulture became highly developed during the time of Roman civilization. The Gardens of Lucullus (Horti Lucullani) on the Pincian Hill at the edge of Rome introduced the Persian garden to Europe, around 60 BC. The garden was a place of peace and tranquility, a refuge from urban life and a place filled with religious and symbolic meanings. As Roman culture developed and became increasingly influenced by foreign civilizations through trade, the use of gardens expanded. Gardens ultimately thrived in Ancient Rome.

Roman gardens were influenced by Egyptian, Persian and Greek gardening techniques. Formal gardens existed in Egypt as early as 2800 BC. During the 18th dynasty of Egypt, gardening techniques were fully developed, and were used to beautify the homes of the wealthy. Porticos were developed to connect the home with the outdoors, as it created outdoor living spaces. Persian gardens developed according to the needs of the arid land. The gardens were enclosed to protect from drought, and were rich and fertile in contrast to the dry and arid Persian terrain. Pleasure gardens originated from Greek farm gardens, which served the functional purpose of growing fruit. The Peristyle garden also came from Greek influence; it was used to beautify temple groves and create recreational spaces. Open peristyle courts were first designed to fuse homes with the outside world. In Ancient Latium, a garden was part of every farm. According to Cato the Elder, every garden should be close to the house and should have flower beds and ornamental trees. Cimon of Athens is said to have torn down the walls of his garden to transform it into a public space.[1] As Alexander the Great conquered parts of Western Asia, he brought back with him new varieties of fruits and plants that prompted a renewed interest in horticulture. .[2] Horace wrote that during his time, flower gardens became a national indulgence.[3] Augustus constructed the Porticus Liviae, a public garden on the Oppian Hill in Rome. Outside Rome, gardens tended to proliferate at centers of wealth.

Parts of a Roman Garden

Gardens were usually built in one of six structures:[4]

Town House "Domus" — This free-standing structure is usually one story, containing multiple rooms for everyday activities and an atrium toward the front of the house to collect rain water and illuminate the area surrounding it. Toward the back of the house, a hortus or peristylium (an open courtyard) is found.

Urban Villa "Villa Urbana" — These villas are where Roman citizens would go on holiday excursion or would stop and rest when traveling late through the night.[5]

Suburban Villa "Villa Suburbana" — A Roman take on the country home, used specifically for recreational use.

All Roman gardens were generally separated into the same basic parts. Depending on the style or type of garden, parts may be added and/or embellished more, or parts may be omitted completely.[4] Even though an atrium is found inside the house, it is considered part of the garden because it is the opening that would allow Romans to collect rain water used to irrigate the plants and gardens located on the property.

Peristyle is a Greek word; when broken down "Peri" means around and "style" means column. So it is a type of open courtyard connected to the home, which is surrounded by walls of columns supporting a portico.[6]

A Hortus or xystus (garden walk or terrace) is the meat of what is found in Roman gardens. The xystus often overlooked a lower garden, or ambulation. The ambulation consisted of a variety of flowers, trees and other foliage and served as an ideal milieu for a leisurely stroll after a meal, some mild conversation or other Roman recreation activities. The gestation was a shaded avenue where the master of a home could ride horseback or be carried by his slaves. It generally encircled the ambulation, or was constructed as a separate oval shaped space. Paths or walkways were often constructed for easy routes around the garden. These were made with loose stone, gravel, sand or packed earth. Gardens featured many ornamental styles, from sculpture to frescoes to sundials. These depict nature scenes or were put in place as a shrine (aediculae) to the gods or other worldly creatures.

Pleasure gardens would incorporate different designs depending on the taste of those who built them. All gardens of this type have the same basic parts to them; there is a patio at the entrance, a terrace, an orchard or vineyard, several water features, a kitchen garden, shrines or grottoes and other decorations that would personalize the presentation of the garden tour. The patio would normally be decorated with outside garden furniture, a type of water basin/fountain and the start of a walk that would show off all the splendid exhibits to be found there.

The plants that were grown in these gardens ranged from a number of flowering ones to herbs and vegetables for everyday use, and trees. The most popular plants found in a typical Roman family's garden were roses, cypress, rosemary and mulberryfandig trees. It also included a variety of dwarf trees, tall trees, marigolds, hyacinths, narcissi, violets, saffron, cassia and thyme.[7]

Roman gardens were built to suit a range of activities. Before, gardens were commonly used for less wealthy Roman families to support themselves. The gardens were used to grow mainly herbs and vegetables. Soon, different influences of Greek, Egyptian, Italian and Persian gardens leaked into the Romans culture, producing Villas and Palatial pleasure gardens, along with public parks and gardens purely meant to exercise in. No type of garden was specifically reserved for wealthy Romans; all a civilian needed was to have their own land and/or home. Excavations in Pompeii show that gardens attaching to residences were scaled down to meet the space constraints of the home of the average Roman. Modified versions of Roman garden designs were adopted in Roman settlements in Africa, Gaul and Britannia. As town houses were replaced by tall insula (apartment buildings), these urban gardens were replaced by window boxes or roof gardens.