This article is about the gardening arrangement. For the theatre seating arrangement, see theatre (structure). For theatre audience, see Parterre (theater audience). 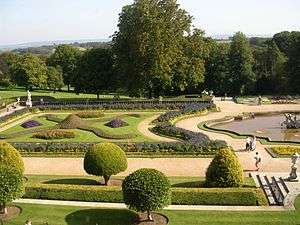 The left hand side of the completely symmetrical parterre at Waddesdon Manor, England

A parterre is a formal garden constructed on a level surface, consisting of planting beds, typically in symmetrical patterns, separated and connected by gravel pathways. Beds may be edged in stone or tightly clipped hedging and may not contain flowers.

French parterres originated in 15th-century gardens of the French Renaissance often taking the form of knot gardens. Later, during the 17th century Baroque era, they became more elaborate and more stylised. The French parterre reached its highest development at Versailles; this inspired many other similar parterres throughout Europe.

The parterre was developed in France by Claude Mollet, the founder of a dynasty of nurserymen-designers that lasted deep into the 18th century. His inspiration in developing the 16th-century patterned compartimens—simple interlaces formed of herbs, either open and infilled with sand or closed and filled with flowers—was the painter Etienne du Pérac, who returned from Italy to the château of Anet, where he and Mollet were working. About 1595 Mollet introduced compartment-patterned parterres to royal gardens at Saint-Germain-en-Laye and Fontainebleau; the fully developed scrolling embroidery-like parterres en broderie appear for the first time in Alexandre Francini’s engraved views of the revised planting plans at Fontainebleau and Saint-Germain-en-Laye in 1614.[1] 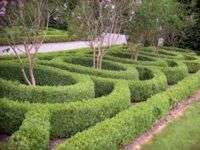 Clipped box met with resistance from garden patrons for its "naughtie smell" as the herbalist Gervase Markham described it. By 1638, Jacques Boyceau described the range of designs in box a gardener should be able to provide:

Parterres are the low embellishments of gardens, which have great grace, especially when seen from an elevated position: they are made of borders of several shrubs and sub-shrubs of various colours, fashioned in different manners, as compartments, foliage, embroideries (passements), moresques, arabesques, grotesques, guilloches, rosettes, sunbursts (gloires), escutcheons, coats-of-arms, monograms and emblems (devises)

By the 1630s, elaborate parterres de broderie appeared at Wilton House, so magnificent that they were engraved—the only trace of them that remains. Parterres de pelouse or parterres de gazon refer to cutwork parterres of low-growing herbs like camomile as much as to the close-scythed grass. An alley of compartiment is that which separates the squares of a parterre.

Parterre gardening fell out of favour in the 18th century and was superseded by the naturalistic English landscape garden, which emerged in England in the 1720s. However, in the 19th century parterre gardening experienced a revival, coinciding with Neo-Renaissance architecture and the fashion for carpet bedding, which was realized by mass planting of non-hardy flowering annuals that were set out anew at the start of each season and provided blocks of color that made up the design. Flat surfaces were required, and a raised terrace from which to view the design, and so the parterre was reborn in a modified style.

At Kensington Palace the planting of the parterres was by Henry Wise, whose nursery was nearby at Brompton. In an engraving from 1707–1708, (illustration, right), the up-to-date Baroque designs of each section are clipped scrolling designs, symmetrical around a centre, in low hedging punctuated by trees formally clipped into cones; however, their traditional 17th century layout, a broad central gravel walk dividing paired plats, each subdivided in four, appears to have survived from the Palace's former (pre-1689) existence as Nottingham House. Subsidiary wings have subsidiary parterres, with no attempt at overall integration. 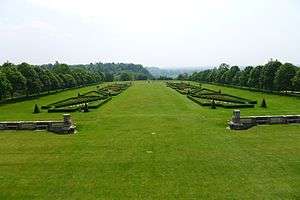 The parterre at Cliveden from the terrace, with the newly restored 19th-century style planting. 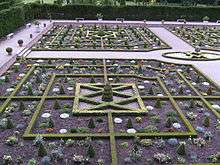 The parterre at Hanbury Hall, Worcestershire, viewed from a first floor window.

At Prince Eugene's Belvedere Palace, Vienna, a sunken parterre before the façade that faced the city was flanked in a traditional fashion with raised walks from which the pattern could best be appreciated. To either side, walls with busts on herm pedestals backed by young trees screen the parterre from the flanking garden spaces. Formal baroque patterns have given way to symmetrical paired free scrolling rococo arabesques, against the gravel ground. Little attempt seems to have been made to fit the framework to the shape of the parterre. Beyond (in the shadowed near foreground) paired basins have central jets of water.

In the UK, modern parterres exist at Trereife Park[2] in Penzance (Cornwall), at Drumlanrig Castle in Dumfriesshire and at Bodysgallen Hall near Llandudno. Examples can also be found in the Republic of Ireland, such as at Birr Castle. One of the largest in Britain is at Cliveden in Buckinghamshire, which covers an area of 4 acres (1.6 ha); it consists of symmetrical wedge-shaped beds filled with Nepeta ("catmint"), Santolina and Senecio, edged with box hedges. Sentinel pyramids of yew stand at the corners.

Some early knot gardens have been covered over by lawn or other landscaping, but the original traces are still visible as undulations in the present day landscape. An example of this phenomenon is the early 17th-century garden of Muchalls Castle in Scotland.

At Charlecote Park in Warwickshire the original parterre from the 1700s has been recreated on the terrace overlooking the river. 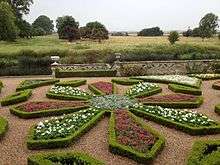