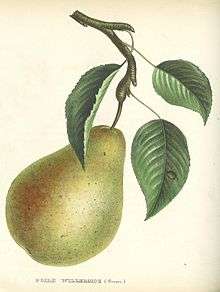 Pomology (from Latin pomum (fruit) + -logy) is a branch of botany that studies and cultivates fruit. The denomination fruticulture—introduced from Romance languages (from Latin fructus and cultura)—is also used.

Pomology has been an important area of research for centuries.

During the mid-19th century in the United States, farmers were expanding fruit orchard programs in response to growing markets. At the same time, horticulturists from the USDA and agricultural colleges were bringing new varieties to the United States from foreign expeditions, and developing experimental lots for these fruits. In response to this increased interest and activity, USDA established the Division of Pomology in 1886 and named Henry E. Van Deman as chief pomologist. An important focus of the division was to publish illustrated accounts of new varieties and to disseminate research findings to fruit growers and breeders through special publications and annual reports. During this period Andrew Jackson Downing and his brother Charles were prominent in Pomology and Horticulture, producing The Fruits and Fruit Trees of America (1845).[1]

The introduction of new varieties required exact depiction of the fruit so that plant breeders could accurately document and disseminate their rearch results. Since the use of scientific photography was not widespread in the late 19th Century, USDA commissioned artists to create watercolor illustrations of newly introduced cultivars. Many of the watercolors were used for lithographic reproductions in USDA publications, such as the Report of the Pomologist and the Yearbook of Agriculture.

Today, the collection of approximately 7,700 watercolors is preserved in the National Agricultural Library's Special Collections,[2] where it serves as a major historic and botanic resource to a variety of researchers, including horticulturists, historians, artists, and publishers..

The study of pomology has somewhat dwindled over the past century..