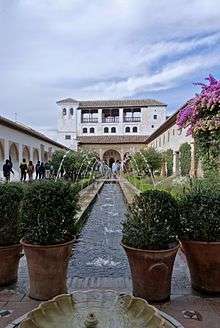 A traditional Spanish Garden is a style of garden or designed landscape developed in historic Spain, incorporating principles and elements of garden design from precedents in ancient Persian gardens, Roman gardens and Islamic gardens, and the great Moorish gardens of the Al-Andalus era on the Iberian Peninsula. In the 20th and 21st centuries a 'Spanish Garden,' or new gardens in Spain, have continued, interpreted, abstracted, or departed from these traditional planning and aesthetic motifs.

Traditionally, the paradise garden is interpreted with a central cross axis, in the four cardinal directions, with long ponds or water channels (a rill or stylized qanat) where water reflects and flows, set in a walled courtyard. The remaining quadrants often had fruit trees and fragrant plants. Thus, characteristic sensory experiences are refreshing coolness, humidity, sounds, greenery, and fragrance. This type of garden is compatible with the Spanish climate of sun and heat. Provisions for shade are given with the use of arcades, pergolas, trellising, and garden pavilions. Ceramic elements and tiles are often used: in water features; for structural, decorative, and seating elements; and as paving; with solid fields, embellishments and accents; and in pottery. A clarity from the symmetrical simplicity often results.[1]

Spain has a long tradition of making gardens. Significant gardens were made by:

Many historic gardens are protected by a heritage designation, Jardín histórico.