For the opera by Michael Tippett, see The Knot Garden. 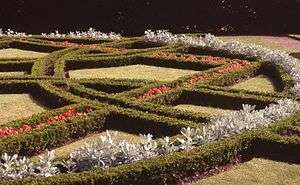 A knot garden is a garden of very formal design in a square frame, consisting of a variety of aromatic plants and culinary herbs including germander, marjoram, thyme, southernwood, lemon balm, hyssop, costmary, acanthus, mallow, chamomile, rosemary, Calendulas, Violas and Santolina. Most knot gardens now have edges made from box (Buxus sempervirens), whose leaves have a sweet smell when bruised. The paths in between are usually laid with fine gravel. However, the original designs of knot gardens did not have the low box hedges, and knot gardens with such hedges might more accurately be called parterres. 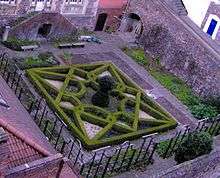 The Knot Garden at the Red Lodge Museum, Bristol.

Knot gardens were first established in England in the reign of Queen Elizabeth I.

Some early knot gardens have been covered over by lawn or other landscaping, but the original traces are still visible as undulations in the present day landscape. An example of this phenomenon is the early 17th-century garden of Muchalls Castle in Scotland.

Knot gardens have become established in many temperate formal gardens throughout the world, including: