Fushun (simplified Chinese: 抚顺; traditional Chinese: 撫順; pinyin: Fǔshùn, formerly romanised as Fouchouen, using French spelling) is a prefecture level city in Liaoning province, China, about 45 km (28 mi) east of Shenyang, with a population of 2,138,090 inhabitants (2010 census) and a total area of 11,272 km2 (4,352 sq mi), 714 km2 (276 sq mi) of which is the city proper. Situated on the Hun River ("muddy river"), it is one of the industrial and economic development hubs in Liaoning.

Fushun was in a depressed state for near one-and-a-half centuries of the early Qing dynasty. It was in 1783 that the Fushun new city was completed southwest of the old City. The city was occupied by Russia until 1905 and by Japan until 1945. With the Japanese victory over Imperial Russia and signing of the Treaty of Portsmouth, the South Manchuria branch (from Changchun to Lüshun) of the China Far East Railway was transferred to Japanese control. South Manchuria Railway Company quickly expanded the system inherited from Russia to staggering proportions. They developed coal mines at Fushun. Under the control of the Japanese and with 30 years of development, the Fushun area became a highly industrialized area. In Fushun there is also a Lei Feng Memorial Hall, with a museum.

Fushun has 2.14 million inhabitants, including 1.34 million in the urban area. It is now part of the Shenyang-Fushun built-up area (comprising all the urban and suburban districts of Shenyang and Fushun) which was home to 6,756,379 inhabitants in 2010. This makes Shenyang-Fushun the 8th most populous built up area in China after the Pearl River Delta conurbation of Guangzhou, Shenzhen, Dongguan, Foshan, Jiangmen, Zhongshan and Huizhou, then Shanghai-Suzhou, Beijing, Tianjin, Hangzhou-Shaoxing, Wuhan and Nanjing. 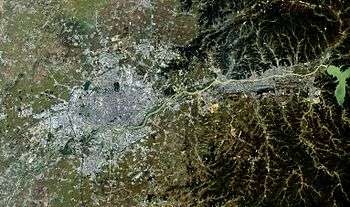 Fushun is a highly industrialized area and originally called City of Coal. It has developed as a thriving center for fuel, power and raw materials and is also offering more and more opportunities in textiles and electronics. The world's largest open-pit coal mine, the West Open Mine, is located south of the city. Exploited from the 12th century, it was operated as an open pit mine during the 20th and early 21st Century; however, as of 2015, the West Open pit, 1,000 feet deep, with an area of 4.2 square miles, was exhausted and unstable. Total coal production in Fushun as a whole had fallen below 3 million tons, down from 18.3 million tons in 1962.[12] Fushun has a major aluminum-reduction plant and factories producing automobiles, machinery, chemicals, cement, and rubber.

Fushun is known as "the capital of coal". The main coal and oil shale company is Fushun Mining Group, which produced about 6 million tons of coal in 2001, mainly blending coking coal and steam coal.[14][15] The company also has coalbed methane resources of around 8.9 billion cubic meters.[15] In addition, it owns geological reserves of high grade oil shale, about 3.5 billion tons, of which the exploitable reserve is 920 million tons.

Fushun has developed through the utilization of the abundant natural mineral deposits found in the area and is a nationally important heavy industrial base for petroleum, chemical, metallurgy machinery and construction material industries. New sectors also becoming prominent are electronics, light industry, weaving and spinning.

From 1965 oil shale usage in Fushun started to decline[18] with the discovery of Da Qing oil field in the 1960s. Sinopec, a shale oil producer during those times, shut down its oil shale operations in the beginning of the 1990s.[17] At the same time, the Fushun Oil Shale Retorting Plant was established as a part of the Fushun Mining Group. It started production in 1992. In the same year,the China National Oil Shale Association was established in Fushun.[17]

At the end of 2006, the Fushun Mining Group operated the largest shale oil plant in the world, consisting of seven retorting units with 20 retorts in each unit, for a total 140 sets of Fushun type retorts.[18][19]

There are also two oil refineries. Fushun Petrochemical Company, a subsidiary of PetroChina, is building a refining and petrochemical complex in Fushun.[20]

Fushun is located 40 km (25 mi) from Shenyang Taoxian airport. Railways and highways connect the city to Shenyang and Jilin Province. The seaports of Dalian and Yingkou are also nearby, 400 and 200 km (250 and 120 mi) away respectively, with good highway connections.

The highest-ranked institution of higher education is the Liaoning University of Petroleum and Chemical Technology, ranked 123rd in China overall. Fushun No.1 High School and Fushun No.2 High School are major high schools in Fushun. Requirements for post-secondary schools are high. Students must achieve a certain grade minimum to continue pursuing individual careers.

There are a number of historic and cultural sites within the area. Fushun's success in applying for two UNESCO World Heritage sites is expected to attract more tourists. They include a site known as Xingjing City, the origin of the Qing Dynasty, which is within today's Fushun. It was the first capital of the Late Jin dynasty, dating to 1616. The second site contains the Yongling tombs, where several members of the royal household are buried.

In more recent times, Fushun was where Lei Feng was stationed as a soldier and died, and a memorial museum telling his life story is a popular attraction. It is located at Wang Hua District in Fushun. It was also in Fushun that the last emperor, Puyi, was imprisoned after the end of World War II. The Fushun War Criminals Management Centre is now converted into a museum. Another war memorial, the Pingdingshan Tragedy Memorial Hall Ruins, tells the story of a massacre of Chinese people by the Japanese in 1931. It was rebuilt and expanded in 2007. It includes a pit full of about 800 bodies; all of these infants, adults, and elderly victims were cruelly killed by the Japanese.

In addition, Red River Valley in Fushun has become an entertainment resort, especially in summer. Tourists can travel down the river on small rubber rafts through mountain scenery; the valley is called 'the first rafting route in northern China'.

The city used to be home of the Chinese Super League (soccer) team of Liaoning FC at Leifeng Stadium. However, when the team could not afford the rent at the Leifeng Stadium it moved to Beijing, where it now plays out of Chaolai Soccer Base in the northeastern part of that city.

The film The Lover starring Tony Leung Ka Fai described a love story between a young French woman and a young man from Fouchouen.