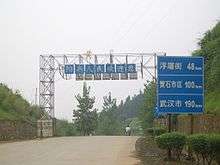 A road sign shows distance to the "Huangshi urban area" (黄石市区) rather than simply "Huangshi" (黄石). This is a useful distinction, because the sign is located already within Huangshi prefectural level city (immediately upon entering its Yangxin County from the neighboring Xianning), but still 100 kilometres (62 mi) from the Huangshi main urban area.

A prefectural level city is a "city" (Chinese: 市; pinyin: shì) and "prefecture" (Chinese: 地区; pinyin: dìqū) that have been merged into one unified jurisdiction. As such it is simultaneously a city, which is a municipal entry with subordinate districts, and a prefecture with subordinate county-level cities and counties which is an administrative division of a province.

Criteria that a prefecture must meet to become a prefectural level city:

15 large prefectural level cities have been granted the status of sub-provincial city, which gives them much greater autonomy.

Shijiazhuang and Zhengzhou are the largest prefectural level cities with populations approaching or exceeding some sub-provincial cities.

A sub-prefecture-level city is a county-level city with powers approaching those of prefectural level cities.

There are total of three classification of prefecture-level city:

This convention may lead to difficulty in the identification of places mentioned in older sources. For example, Guo Moruo writes that he was born in Town of Shawan, within Prefecture of Leshan, and attended primary school in Town of Jiading. A modern map is unlikely to show either town: Shawan, because it is too small, and Jiading, because it is the seat of City of Leshan, and is therefore indicated on the map by a point labelled "Leshan." A more detailed map would show Shawan as a district within City of Leshan, but Jiading would still be missing.

Statistics of China such as population and industrial activity are generally reported along prefectural city lines. Thus, the relatively unknown City of Huangshi has 2.5 million residents, more than most European capitals, but upon closer inspection, the city covers an area almost 100 kilometers across. Furthermore, Huangshi contains several other cities, such as City of Daye. If a person wished to calculate the population of the urban area of Huangshi, and had a map of Huangshi, and a table of its population by district, the task might not be easy. The urban area might be split between several districts, and some of those districts may include rural elements as well.