For the town and taluk in Bellary District, Karnataka, see Hagari Bommanahalli. 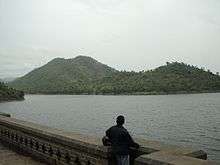 Vanivilas Dam across the river

The Vedavathi is a river in India. It rises from the Western Ghats and flows through the states of Karnataka and Andhra Pradesh . The Vedavathi is also called the Hagari in parts of Andhra Pradesh. Two rivers, the Veda and Avathi, arise in the eastern part of the Sahyadri Hill range, flow east, and join concert near Pura to form the Vedavathi.

On the banks of the Vedavathi, there is a famous temple devoted to Shri Anjaneya at Kellodu, Hosadurga Taluk.

The Vani Vilasa Saagara reservoir constructed across river Vedavathi dates back a century.Vanivilas sagar is also known as Marikanive and this was first dam built by Sir M Vishweswariah and known first natural reservoir built between two hills.

A tributary called the Suvarnamukhi confluences with Vedavathi at Koodalahalli, Hiriyur Taluk. It is considered to be a 'Punya Bhumi' or 'Sacred Land' by the locals. The Vedavathi river then flows from Hiriyur towards Narayanapura, Parashurampaura, Vrindavanahalli, where river flows circularly, hence village called Vrindavana Halli and then to Jajur (moodala jajur) Nagagondanahalli, Janamaddi and then enters Andhra Pradesh i.e. Bhairavnapippa Dam. On the banks of Nagagondanahalli there is a famous math by name Chilumeswamy who was an avadhoot and fair is conducted every year and lakhs of people visit. On the other side of Vedvathi river there is a village Jajur. Main temples located in Jajur Kariyamma, Anjaneya, Shiva, Shri Kodanada Rama, Lakshmana, Sita, Anjenya, and Nagarakatte and shri Shankaracharya.

The river then flows down to the southeastern state of Andhra Pradesh, where the river is called the 'Hagari'. The river has a cultural significance, with the people along the belt of the Hagari depending entirely on the river for most of their needs. Bhairivani Tippa Reservoir is built across this river.

The Vedavathi starts from Karnataka; it goes through Gundalaplli and Vepurala and some drylands after it is connected to Thungabhadra.

The state government has decided to rejuvenate the Vedavathi river in Chikmagalur district, which dries up during summer. In the last 20 years, the river has been flowing in full splendour only during the rainy season. It remains dry in summer due to over exploitation of water resources and unplanned development. The plan includes construction of over 810 water harvesting structures like percolation wells, injection wells and ponds.[1]